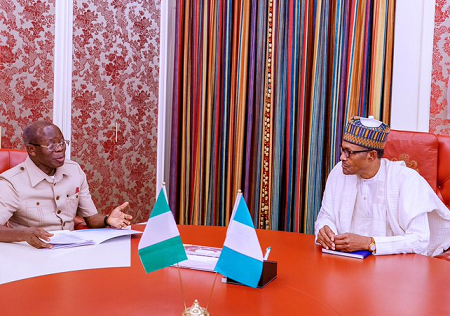 Embattled National Chairman of the All Progressive Congress (APC), Comrade Adams Oshiomhole, on Thursday at the presidential villa, Abuja met with President Muhammadu Buhari, after which he blamed some members of the national leadership of the party, for being behind his travails.

His meeting came barely 24 hours after a Federal Capital Territory High Court issued an order for him to stop parading himself as the national chairman of the party.

Oshiomhole’s meeting with the president came after the Chairman of the Nigerian Governors Forum (NGF) and governor of Ekiti state, Dr Kayode Fayemi, met with Buhari before Kebbi state governor Atiku Bagudu, who is the Chairman of the Progressive Governors Forum had a meeting with the president along with his Jigawa State counterpart, Abubakar Badaru.

Speaking to State House correspondents, Oshiomhole, he said he was in the villa to brief the president on the crisis in the party, accused some members of its national leadership of being behind his ordeal.

He said: “Let me also say that those behind this plot, the hands you saw which include as you saw yesterday you saw the Edo State governor and his people jubilating, but that is the irony of life that you will help give birth to a child and the child look for cutlass to want to chop off your neck.

“But there are only other forces who see me for whatever reason as a threat to them. And those leading this anti-Oshiomhole campaign, some of them, I emphasize, cannot even boost of a counsellor in their state even as they lay claim to a leadership position in our party.”

The party boss lambasted the Federal Capital Territory High Court for entertaining a matter over which it has no jurisdiction.

He added: “Just on Wednesday morning, I suddenly saw in the news that an FCT High Court has suspended me as national chairman and that the person who went to the court includes one of my vice-chairmen (North East), one Mustapha (Mustapha Salihu APC National Vice Chairman Northeast) and four others.

“I was taken back because in the same suit they joined the APC, the police as the DSS.

“Our lawyers told me that in law that when you sue a federal agency, FCT High Court has no jurisdiction to entertain it.

“Number two, the purported suspension of my person by my ward. First, is not even true and I am going to give you a document to that effect so that you can form your opinion.

“Number three, I am not an officer of my ward, I am the national chairman of my party, elected at a national convention by over 7,000 delegates. So, how could nine persons sit down somewhere and purport that they have removed a national chairman? And the court contrary to all logic, all judicial precedence find comfort in granting an interim interlocutory order to stop me from functioning pending when the matter is determined.

“In other words, he has given the order without the facts being laid before him and in the process adjourned the case to 7th of April.

“The calculations are clear, that between now and April 7, my opponent in the system would have had ample time to do all the mischievous plans they have in place to destabilise the APC because some of them have a membership of more than one political party.

“But happily on Thursday, a Federal High Court that I believe has jurisdictions on federal issues because the DSS, the police are not state institutions but federal institutions has given an appropriate order to restrain the so-called suspension that was allegedly imposed on me by my ward in Edo State.”

The party boss said his ward executives have no powers to remove him as the national chairman of the party, a decision the FCT court relied upon for its order.

Oshiomhole explained: “How the court can hold a vote of confidence and twist it to mean a vote of no confidence, only that judge can explain it to himself.

“But the good news is that this is not a final court nor is it the only court. Incidentally, it is just the court that didn’t have the jurisdiction even to listen to this matter.

“And our lawyers so pointed it out but the judge was determined to oblige those who want to destabilise the All Progressive Congress.”

Speaking on his efforts to build the APC, Oshiomhole was confident that he would prevail over his enemies at the end of the day.

He stated: “Those fighting me couldn’t deliver even a counsellor of a local government in their unit. And they just feel that if they cannot give me orders, then they must do everything to embarrass my person.

“But I believe that he who God stands with, no man born of a woman can bring him down. I can’t say more than that.

“Those who are parading themselves, holding meetings at night, my prayer to my God is that let them meet at night. What they do at night will be destroyed by my light in the day time. I don’t go for night business I do daily business. They know themselves, they know me and I know them.”