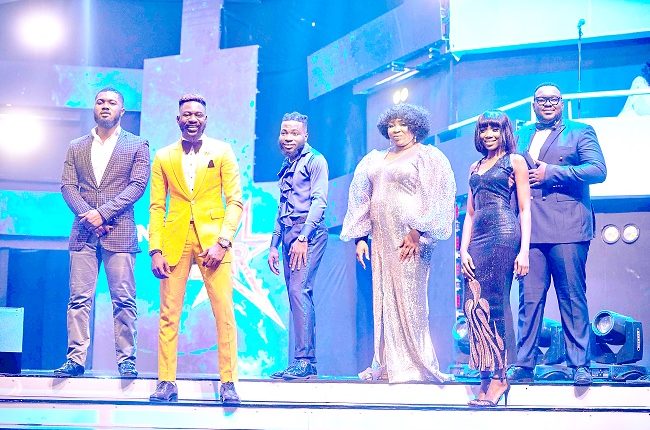 The final six contestants on the MTN Y’ello Star music reality TV project emerged this weekend following the second round of evictions after last week’s bottom-five performances were put up to be saved by the fans.

Based on votes cast, only Storm remained in the competition while David Garland, G-Isaac, Jesse Drumz and the duo of Oiza and Meyi lost their right to performance, but remained in the hub to continue their education.

Earlier in the week, all the finalists, including the earlier relegated talents had a chat with the Regional Director, Creative Economy Programme for Sub-Saharan Africa at British Council, Ojoma Ochia who spoke to them about intellectual property and grant opportunities to support their music careers and help them spread their work beyond their home country. They were also joined by the likes of renowned filmmaker Sesan, record label executive Paul Okeugo of Chocolate City, renowned OAP, Gbemi of Beat 99.9 FM, and ace fashion designer Mai Atafo, who spoke to them about general branding.

Saturday’s gala show marked the first appearance of guest judge, Malik Yusef who is in Nigeria for the 8th time and positioned to work closely with the top five finalists.

Caesar kicked off the night’s performances with a delivery of ‘Symphony’ by Clean Bandit and Zara, followed by Freeborn’s performance of Khona by Mafikizolo & Uhuru. For each of the performances, the judges gave only feedback and pointers for improvement as scores and ratings would now be determined by fan votes. Gideon got the first reaction from guest judge Malik Yusef, who said he was on top of it and gave him a thumbs up. The night ended with Storm’s performance of ‘Get Up’ by Sarz, DJ Tunez and Flash.

Just before the judges left things open to the fans, Omawumi reminded the finalists that, “this is crunch time and you must bring your A-game to this point to win.”

Sunday night’s performances featured more soulful renditions from the likes of Freeborn who sang ‘I will always love uou’ by Whitney Houston, Caesar who performed Whitney Houston and Mariah Carey’s ‘When you believe’ and Gideon who delivered Lady Gaga’s ‘Always remember us this way’ with a bit of his own style. The other three contestants also gave their own performances, which the judges gave their feedback on.

Reacting to Storm’s performance of ‘Distant Lover’ by Marvin Gaye, saved finalist, Banky W advised him to let go of the pressure and have fun, even as guest judge Malik admired his style saying his best performance for him remains James Brown’s ‘I Feel Good’. Freeborn, Dotti and FayFay Diamonds also got great feedback from the judges.

While discussing music royalties in Nigeria, Banky W highlighted how much of an issue it still is in Nigeria as it is often determined by what is signed in the contract. “Some people decide to pay off everyone, while some others decide to give a certain percentage off”, he said. Malik added that it seems to be more organised in the US, as huge artists like Beyonce get a certain percentage of song royalties, even if the song is written by someone else.

Their conversation and feedback to the finalists wrapped up the night, opening the voting lines to fans to pick who their favourite finalists are. The show’s final two episodes will air next weekend, and the debut season’s winner will be announced. The winner will receive N5million in cash, a fully furnished house with an in-house studio, a scholarship to attend a summer program at the Berklee College of music, amongst other benefits.

t is still uncertain whether the ongoing strike by the Academic Staff Union of Universities (ASUU) will end soon as President of the union, Professor ‘Biodun Ogunyemi said there were certain steps to be taken to reach that final conclusion on the issue…Malik Yusef joins  Malik Yusef joins

Corruption war far from being won in Nigeria — Group