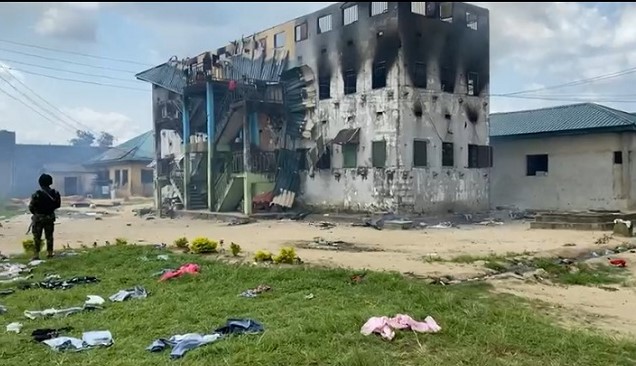 One prison officer has been confirmed dead as inmates of the Nigerian Correctional Service, Warri, on Thursday, attempted to escape from the facility.

The inmates, numbering 107 with outside collaborators, had successfully set the administrative office of the correctional centre on fire before attempting to escape the facility.

It was gathered that at the same time, hundreds of youths pretending to be #EndSARS protesters, had also laid siege to the prison to forcefully effect the release of the inmates.

However, soldiers from Sector 1, 3 Battalion, Nigerian Army, who had received a distressed call, swiftly responded.

Before then, the warders were said to have been overpowered by the inmates of the correctional centre and attempted to escape.

However, soldiers, led by the Commander, Sector 1, Nigerian Army, Col. S. Ahmed, arrived at the scene and repelled the attack while the 107 inmates were safely contained.

Sources said trouble had begun when some hoodlums made their way to the correctional facility in an attempt to free the inmates on Thursday afternoon.

The inmates, in an effort to escape, snatched a rifle from one of the warders and allegedly shot him dead and set the administrative building on fire.

Checks at the centre revealed that the attempted jailbreak had been contained and inmates returned to their cells while soldiers were still seen taking strategic positions.

In a video made available to our correspondent by a senior security officer, the soldiers were seen being instructed by their leader to apply the rule of engagement in handling the inmates.

“We escorted the prison wardens into the prison and they have subdued all the inmates. They have all been locked up.

“Not a single escaped out of the 107 inmates. However, three of them were caught and one has died and that was before we came in here,” the source disclosed.

Some residents of the area lauded the soldiers for their swift response in containing the attempted jailbreak, saying it would have been a disaster for residents of Warri and environs.

Meanwhile, the Attorney General and Commissioner for Justice, Delta State, Peter Mrakpor, on Thursday, stated that none of the inmates escaped from the facility contrary to some earlier reports.