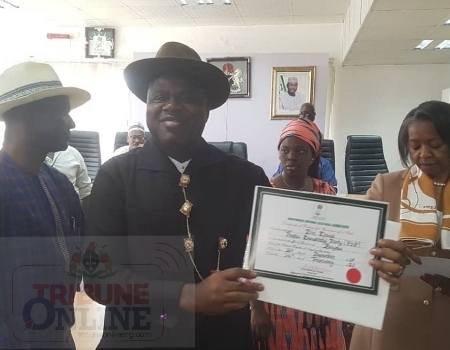 The Independent National Electoral Commission, (INEC) on Friday in deference to the pronouncement of the Supreme Court issued Certificate of Return to the Peoples Democratic Party (PDP)candidate in last November governorship election in Bayelsa state, Senator Douye Diri.

The apex court five-man panel led by Justice Mary Peter-Odili on Thursday directed the Independent National Electoral Commission to issue a fresh certificate to the candidate of the party with the next highest votes and with the required constitutional spread of votes in the results of the election.

Justice Ejembi Ekwo who read the judgement declared that Biobarakuma Degi-Eremienyo who was running mate to the APC candidate, David Lyon presented forged certificates to INEC.

Addressing newsmen on Friday prior to the presentation of the Certificate of Return, INEC chairman, Professor Mahmoud Yakubu disclosed that the PDP candidate and governor-elect, Senator Diri scored the highest number of lawful votes and scored more than 25% of the lawful votes cast in all the eight (8) Local Government Areas of the State.

Voiding the votes scored by the candidate of the All Progressives Congress, David Lyon, Professor Yakubu gave the total number of lawful and valid votes in the election as 146,999.  He further noted that the PDP candidate scored the highest number of lawful votes which he gave as 143,172 to meet the constitutional requirements.

The INEC chairman revealed that the Accord Party has the next highest scorer with 1,339 votes.

He said:” In compliance with the orders of the Supreme Court, the Commission met this morning and reviewed the result of the election in which 45 political parties contested.

Without the votes scored by the All Progressives Congress (APC), whose candidates were deemed not to have participated in the election, the total number of lawful and valid votes cast in the election now stands at 146,999. Out of this figure, the candidate of the Peoples Democratic Party (PDP) scored the highest number of lawful votes with 143,172. Similarly, the Party has scored more than 25% of the lawful votes cast in all the eight (8) Local Government Areas of the State.

”Furthermore, the total number of registered voters in places where the election was not held or cancelled as a result of sundry violations is 90,822. The candidate of the Accord party has the next highest scorer with 1,339 votes. The margin of lead between the candidates of the PDP and the Accord party is 141,833 votes. With this outcome, the election is conclusive at first ballot.

Speaking shortly after receiving the Certificate of Return,  from INEC National Commissioner, Legal Services, May Agbamuche-Mbu,

Senator Diri thanked the judiciary for living up to its expectations as the last hope of the common man.

Making a veiled reference to the intractable crisis in his party, the PDP he said God has taught every stakeholder in the party a lesson. He promised to initiate reconciliation so that  Bayelsa PDP chapter could relate as a united political family.

He said: ” I want to thank  God who made it possible. I want to appreciate Commissioners and staffers of INEC. I  won’t forget those God has used for us to be here today, the judiciary, the last hope of the common man. God has taken us through  a winding road and He has taught us a lesson of reconciliation and love.”