•Makinde failed to reach out till my husband died, even afterwards ― Ajimobi's wife 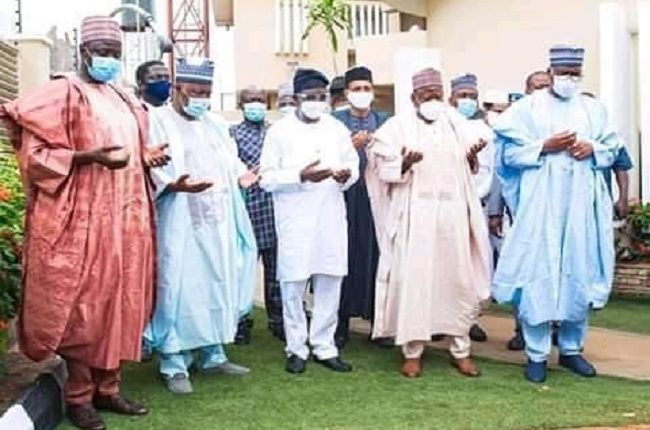 The remains of former Oyo State Governor, Senator Abiola Ajimobi, has been laid to rest at his Oluyole residence in Ibadan, the Oyo State capital, on Sunday morning, amid tight security.

Aside from Islamic clerics, close members of his immediate family witnessed the burial.

Party faithful and other loyalists of the late politician who hoped to witness Ajimobi’s body laid in his grave were not allowed into the Ajimobi residence.

Similarly, movements in and out of the neighbourhood were controlled while the burial lasted.

Prayers were subsequently held for the repose of Ajimobi’s soul at the Senator Ishaq Abiola Ajimobi Mosque, Oke-Ado, Ibadan.

In a brief sermon, Sheikh Muyideen Bello reminded the congregation of the inevitability of death and judgment afterwards.

Noting that life was a passing phase, Bello stressed that Ajimobi will be remembered for his many deeds, especially the building of a mosque. Bello described Ajimobi as a disciplined and hardworking man who ruled with the fear of God when he was Oyo State governor between 2011 and 2019.

“Death is permanent. Ajimobi has come and gone. What Ajimobi has done will not make his name be forgotten, especially, this mosque that he built. All of us will go. We should take care of our children,” Bello said.

After the service, Governor Kayode Fayemi of Ekiti State-led dignitaries to Ajimobi’s Oluyole residence to commiserate with the wife of the deceased, Florence Ajimobi.

Addressing the dignitaries who paid her a condolence visit in her Oluyole residence, Ibadan, Mrs Ajimobi bemoaned politicking and controversy around Ajimobi’s death, noting that she abhorred any attempt to tarnish her husband’s image.

In particular, she chided incumbent Governor Seyi Makinde for not making adequate efforts to reach out to her while the late Abiola Ajimobi was in the hospital or send her a condolence message after her husband’s death.

She held that the late Ajimobi, having served as governor for two terms, was deserving of being respected as a statesman by the current government.

Taking on Oyo deputy governor, Mr Rauf Olaniyan, who was among those who visited, Ajimobi rebuffed Olaniyan’s arguments that attempts were made to call her.

While Olaniyan posited that it was Ajimobi that did not pick his call, Ajimobi hit back that Olaniyan should have sent a text message.

Though Ajimobi said she was unaware of the need to formally inform the Makinde government of her husband’s hospitalization or demise, she said nothing warranted her husband’s name being put in the mud or smeared in the mass media.

“My husband took ill on the 27th of May and he was hospitalized. I was reading in the newspapers that the governor of Oyo State claimed that he called me. I don’t have his number; I have never spoken to him and I don’t want anybody to tarnish my husband’s image. He didn’t call me.

“Even if he claimed to have called me and I didn’t pick, he can send text message. As the wife of a politician, I don’t pick numbers I don’t know.

“My husband never had anything against the governor. We are in different parties but he was an elder statesman.

“What politics are we playing? Life is short. I’m a Christian; my husband was a Muslim. We should all let the fear of God guide us in what we do.

“Ajimobi is gone, so whatever he (Makinde) does, doesn’t matter to me. I’m going to mourn and respect my husband’s wishes. And that is what I did today by laying him to rest peacefully. I don’t want any controversy. I swallowed everything I read in the papers.

“I never sent a word to the state government because I never knew it was necessary for me to send official messages that my husband was hospitalized.

“When my husband was ill, I think the least anybody can do as a God-fearing person is to send me a word of encouragement. Even after he died, nothing.

“My husband is dead and served the state for eight good years. Let’s stop playing dirty politics. They are putting my husband’s name in the mud and I don’t want that,” Mrs Ajimobi said.

Delivering his condolence message on behalf of Nigeria Governors Forum, Governor Kayode Fayemi noted that the late Ajimobi left a gap in the All Progressives Congress (APC) that will be very difficult to fill.
He described Ajimobi as a bridge-builder in the APC and one who was committed to a more peaceful, purposeful and result-oriented party.

Fayemi averred that Ajimobi was one of the best governors in Oyo state, one whose uniqueness endeared him to many political officeholders.