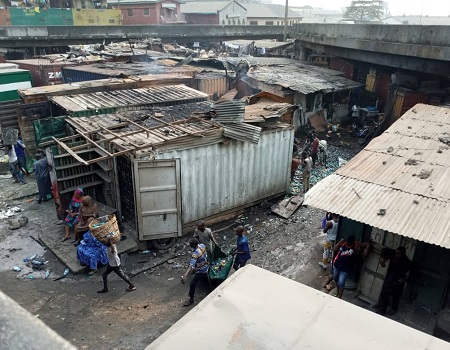 The Director-General, Lagos State Emergency Management Agency (LASEMA), Dr Olufemi Oke-Osanyintolu, said that eight shops were destroyed by a fire outbreak in Apongbon Under Bridge Market in Lagos on Sunday.

Oke-Osanyintolu made this known in an interview with a News Agency of Nigeria (NAN) correspondent at the scene of the fire incident in Apongbon, Lagos.

According to him, upon arrival of the LASEMA Response Team to the scene of the incident at 10:35 a.m. on Sunday, it was revealed that the fire emanated from one of the containerised stores in the market.

He said that the incident happened a few minutes after 10 a.m. on Sunday, saying that the cause of the fire, which spread into other shops, could not be ascertained.

Oke-Osanyintolu noted that the fire destroyed eight shops in the market including goods.

“Efforts by the Lagos State Fire Service and LASEMA Response Team to combat the inferno were successful.

“The fire has been contained and Lagos residents are urged to remain calm,’’ Oke-Osanyintolu said.

He, however, said that the fire-fighting operations had been concluded while recovery and post-fire assessment were ongoing.

NAN reports that the LASEMA Response Team arrived the scene of the incident on time and stopped the fire from extending to the overhead bridge leading to Apongbon /Marina road.