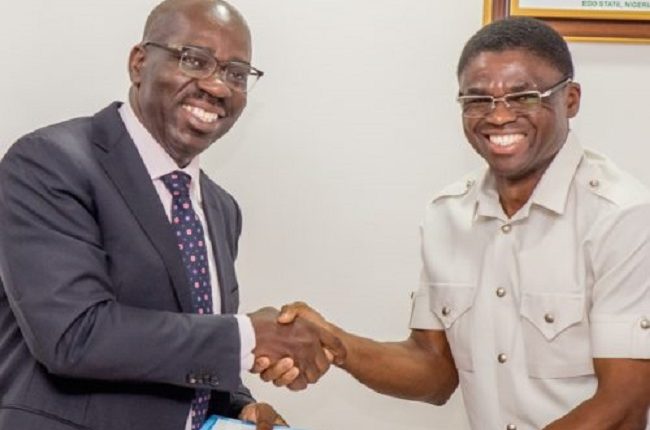 Tribune Online had exclusively reported on June 9, 2019, that Governor Obaseki had perfected plans to dump the APC for the PDP ahead of the 2020 governorship poll following his meeting with his Delta State counterpart, Dr Ifeanyi Okowa in Asaba on June 5.

On the surface, Obaseki breezed into Asaba during the Sallah holiday for a meeting with Okowa where the duo were supposed to “brainstorm on how to deepen economic ties and improve on the security situation in the two states which were part of Bendel State before the separation in August 1991.

A PDP source in Asaba had however disclosed that the parley which went into closed-door and lasted for about 45 minutes was to prepare the ground for Obaseki’s impending dumping of the APC where he has been under persistent attack by aggrieved members to the PDP.

At a brief ceremony on Friday, first, it was Governor Obaseki who put in an appearance at the PDP State Secretariat on First East Circular Road, Benin in the afternoon and was warmly received by the chairman, Dr Anthony Aziegbemi and other top party members.

The echo of his registration as a member had hardly died down when Shaibu who was accompanied by his aides stormed the opposition party headquarters where he also got a red carpet reception.

The move by both men finally put an end to the widespread speculation of their new direction since they resigned their membership of the ruling party following the controversial disqualification of Governor Obaseki by the Governorship Screening Committee of the All Progressives Congress (APC).

The governor who arrived the PDP Secretariat at exactly 2:15 pm in company of his teeming supporters expressed his joy over the reception by the PDP.

He said that with the energy he witnessed in the party on arrival, what Edo people has witnessed in terms of human and capital development in the past four years will be a child’s play compared to what is to come.

He said the Tsunami in development and democratic practice both in party and governance in Edo in particular and Nigeria, in general, would be as never been witnessed since 1999.

Governor Obaseki commended the leadership of the PDP in the state for its shinning example which had attracted him to the party today.

The Chairman Edo State Chairman of the PDP, Dr Tony Aziegbemi gave an assurance that members of the party would accord him good quality and harmonious working relationship.

Dr Aziegbemi also gave the assurance that as the party chairman in the state, he would provide the governor with every support and encouragement needed by him to succeed as the new leader of the party.

He also pledged to mobilise others to rally round the governor in his new task of repositioning the state for the better good of all.

The highpoint of the event was the presentation of the party card to the Governor by Chairman Ward three, Oredo Local Government Area of the party, Mr Ikpommwosa Idahosa.

Shaibu said that he decided to switch camp to the PDP in order to move the state with Governor Obaseki and make Edo State a better place.

At primary school, they hated each other, now the’re celebrating 70 years of marriage