UPDATE: Buhari no longer listening to anyone ― PDP 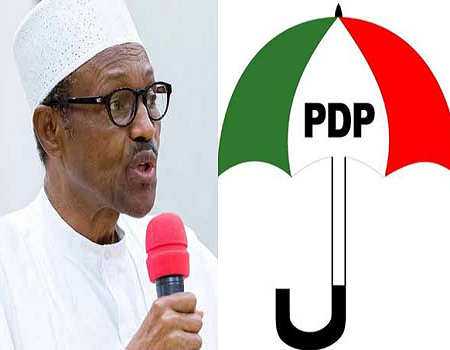 The Peoples Democratic Party (PDP), on Tuesday, resumed its public demonstration over the state of affairs in the country, with the national leadership taking its protest to more foreign embassies including the European Union (EU), and France as well as the United Nations (UN) office.

Led by the National Deputy Chairman (North), Nazeef Gamawa, the party said it was calling the attention to, and requesting for the intervention of the international community on the situation of the country as President Muhammadu Buhari “no longer listens to anybody.”

Speaking after delivering a letter containing the party’s position at the EU embassy in Abuja, Gamawa maintained that the electoral process has been bastardised, the judiciary arm-twisted and the National Assembly intimidated while insecurity has worsened in the country.

Citing the Bayelsa and Imo States, Gamawa reiterated the need for the Supreme Court to review and reverse its judgment on the Imo governorship election.

Gamawa said:  “We are not happy, we are not satisfied with the way democracy is being run in Nigeria.

“We have come here to complain because we have realised that the National Assembly is being intimidated by the executive, the judiciary is being arm-twisted, the rule of law has become a mockery and we thought it wise to come and lay our complaint because they no longer listen to anybody.

“And that is why the Peoples Democratic party decided to reach out to the international community to lay complaint with respect to the Electoral Act that has not been assented to up till now. This is five years since the inception of this administration.

“You are aware of the systematic collapse in our electoral processes, the way elections are being conducted. Kogi, we saw what transpired in the last election. Nigerians have seen for themselves what the opposition party is going through.

Also speaking, the  National Secretary of the party, Senator Ibrahim Tsauri, alleged that the All Progressive Congress (APC) administration in the country has waged a war against the pillars of democracy.

He said apart from the media and the international community, custodians of democracy in the country have been brought to their knees.

The party scribe stated: “Democracy is being derailed in this country. Democracy in Nigeria has been built on five pillars: one the media, two the electoral umpire – INEC, three the security agents, four the judiciary, five, the international community. These are the pillars that support democracy in Nigeria. If one of these pillars collapses, democracy will derail on that side.

“Out of the five, only two are left. The election umpire is compromised, you all know it. Security agents are part and parcel of APC government. Judiciary is being threatened and nobody has any confidence in the judiciary again.

“This is why we came to the international community to tell them that this is the expectations of Nigerians from them and we want them to do exactly what is expected of them to do.

“In Nigeria today, if you talk about security, it is zero. When Buhari came into government, he said that he is going to fight corruption, he was going to intensify effort on economy and then security. None is working now.

“This government does not listen to any voice except the international community. That is why we are here.”

However, the embassy officials did not give any public response to the PDP’s request for intervention.

Recall that the party had recently carried out a similar protest at the United States embassy and the United Kingdom High Mission in Abuja.