• Says no decision yet on Ajimobi, Bulama, Chukwuma 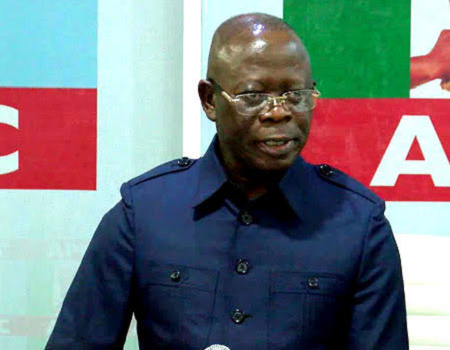 The National Vice Chairman North East of the All Progressives Congress (APC), Salihu Mustapha, has declared that only the Court of Appeal could reinstate Comrade Adams Oshiomhole as the party’s national chairman.

He stated this while reacting to the order of Justice Lewis Allagoa of the Federal High Court, Kano State purporting to set aside an earlier judgment of Justice Danlami Senchi which asked the APC national chairman, Comrade Adams Oshiomhole to vacate his seat.

Speaking with newsmen, Mustapha insisted that the earlier order of Justice Senchi could only be vacated by a Court of Appeal as he noted that both the Kano high court and the FCT high court were courts of coordinate jurisdiction.

A statement issued on Wednesday night and signed by the APC national publicity secretary, Lanre Isa-Onilu, had announced the immediate past Oyo State governor, Abiola Ajimobi, as the new deputy national chairman, South and Architect Waziri Bulama as the new national secretary for the party.

Onilu, in the statement, further claimed that the decision to announce the trio of Ajimobi, Bulama and Chukuwuma as national officers was reached at a January 14 meeting of the national working committee led by Comrade Adams Oshiomhole.

But addressing newsmen, on Thursday in Abuja, Alhaji Mustapha dismissed the claim of Lanre Isa-Onilu as unfounded.

He said no decision was reached on the nominations of Ajimobi, Bulama and Chukuwuma as national officers at the meeting.

The North-East zonal chairman told journalists that the meeting ended in a stalemate following the rejection of the choice of Architect Waziri Bulama from North-East as a replacement for the erstwhile secretary and incumbent Yobe State governor, Mallam Mala Buni.

He equally said the nomination of Senator Ajimobi has caused a division within the ranks of stakeholders of the party in the South-West zone.

He said: “That’s laughable because that one is what amuses me most and it is very pathetic and disturbing because we saw an announcement that purported that we approved nominations of 3 officers on the 14th of January.

“One of these officers, which is the deputy national chairman South, the nomination from his state came to the national vice chairman on the 28 of February almost 40 days after the date of the purported meeting, the meeting we had on the 14th January, I came out of the meeting and I told you guys that the meeting was stopped because they were trying to do illegality on only National Secretary, the matter of the other people was referred to the zone, nobody discussed it.”

The member of the APC NWC also insisted that the earlier order of Justice Senchi could only be vacated by a Court of Appeal as he noted that both the Kano high court and the FCT high court were courts of coordinate jurisdiction.

“First of all, I want to be very brief because we have a case in court and I am a plaintiff so I don’t want to sub judice. But I want to tell you from my knowledge of law that two courts of coordinate jurisdiction cannot sit on appeal on an order or judgement given by each other.

“A Federal High Court cannot sit on appeal on FCT High Court. The only court that has the jurisdiction to sit on an appeal is the Court of Appeal in this case and the order of the FCT High Court was served yesterday,

“Most of you have the copy of order and it is an elementary law that first in time prevails, that of Abuja high court came earlier and we seek for interlocutory injunction and there is affidavit of urgency which seeks to prevail certain kinds of mischief which we prayed that the court should help prevail which they did.

“So if you look at the main reason why that interlocutory order was granted, I don’t think that a Federal High Court of the same jurisdiction will now come and set it aside.

“We don’t need the knowledge of law to know that a high court cannot seat on a matter of appeal in High Court.

“So I don’t want to say much about the order but I want to say that it is only the court of appeal that can vacate this injunction.

“As you can see we are in the secretariat and we are running the affairs of the party. So the suspension still prevails until the hearing of the matter or if there is any contrary order from the court of appeal.”