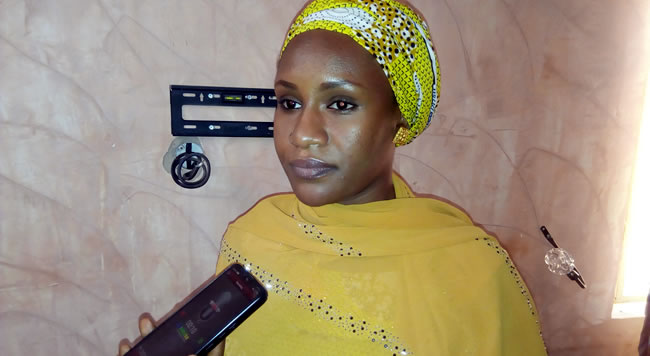 HASSANA, wife of Zakawanu Garuba, late former Speaker of Edo State and her driver were on Saturday abducted
on Lokoja/Okene road by unknown gunmen on their way to Auchi, Kogi State for the funeral of her husband who died in the early hours of Saturday of suspected COVID-19.

The kidnappers of the former Edo Speaker’s wife, according to reports, spared the aged mother of the late former Edo speaker as well as her three children who were left stranded on the highway. Hours after her abduction, the wife of the deceased politician was released unhurt by the kidnappers.

But the driver of the former Edo speaker’s wife whereabouts was unknown as of the time of filing this report. The Edo State governor, Godwin  Obaseki,  had expressed shock at the news of the kidnap and tasked the Edo police command to “immediately launch a rescue operation.”

In a statement, Special Adviser to the Governor on Media and Communication Strategy, Crusoe Osagie, said a rescue operation commenced immediately the incident was brought to the attention of security agencies in the state and the  Police Commissioner, Mr Johnson Kokumo was working with his Kogi State the counterpart to ensure the victims’ rescue.

Osagie said, “Governor Godwin Obaseki is deeply saddened by this incident, which he described as distressing more so,  with the the passing of Right Honourable Zakawanu Garuba, earlier today [Saturday]. “He has ordered the police command to ensure that the kidnap victims are rescued.

The commissioner of police has contacted his Kogi State counterpart and leading the rescue operation.” Garuba, who was the speaker between 2007 and 2009, died in Abuja in the early hours of Saturday during a brief illness, aged 54.

How Suspended EFCC Boss, Magu Avoided Re-Arrest
SUSPENDED former acting chairman of the Economic and Financial Crimes Commission (EFCC), Ibrahim Magu, avoided his re-arrest on Thursday for his decision to remain in the official residence of the EFCC chairman despite being suspended and another acting chairman named for the commission… Read Full Story
NASC Retires Clerk To National Assembly, Four Others
The fate of the embattled Clerk to the National Assembly, Mohammed Sani-Omolori, was sealed on Friday night following the gale of retirement announced by the National Assembly Service Commission… Read Full Story
Nigeria Records 600 New COVID-19 Cases As Total Hits 35,454
The Nigeria Centre for Disease Control (NCDC) has confirmed 600 new cases of COVID-19 in the country. The 600 new cases brought the nation’s confirmed COVID-19 infection cases to 35,454. The NCDCmade this known via its verified Twitter handle on Friday… Read Full Story
COVID 19: FG, WAEC Agree On Shift In WASSCE Date
THE Federal Government and West African Examination Council have agreed to shift the date of West African Senior School Certificate Examination from the August 4 to September 5, 2020, earlier announced by… Read Full Story