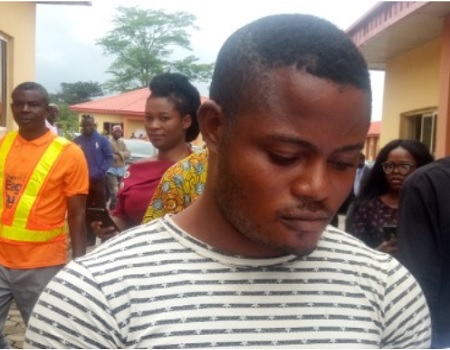 The 33-year-old dismissed soldier who was arraigned on a one-count charge of rape was remanded into the police custody till Friday, August 16, 2019, in order for the defence counsel to study the applications.

The charge read: “That you Sunday Awolola ‘M’ on the 31st day of July, 2019 at about 6:30 pm at Ikare Akoko Military Checkpoint did unlawfully have carnal knowledge of one (name withheld) and thereby committed an offence Contrary to Section 357 and Punishment Under Section 358 of the Criminal Code Cap 37 Vol. 1 Laws of the Ondo State of Nigeria 2006.”

According to him, this will give him adequate time to respond and file an application for the bail of accused.

The Police Prosecutor, Adeoye Adesegun, however, did not oppose the application but sought from the court that the suspect should be remanded in Police custody pending the proper arraignment.

Adesegun, also prayed that the suspect is remanded in prison custody in order for the police to gather more facts on the case against the suspect.

In his ruling, the Chief Magistrate, Mayowa Olanipekun, directed that the soldier should be kept in police custody till tomorrow, Friday, following an application seeking the remand of the suspect in prison custody by the police prosecutor.

The Magistrate said, “The application brought before the court by the police had not been served on the council of the defendant.”

The Magistrate, however, advised the accused to contact his lawyer in order to file a response to the application seeking his remand in prison custody and saying proper hearing of rape case against the suspect would commence at the next sitting.

Magistrate Olanipekun subsequently adjourned the case till Friday, August 16, 2019, in order for the defence counsel to study the applications.

Meanwhile, the arraignment of the randy soldier attracted public outcry and interest from the International Federation of Women Lawyers (FIDA), Ministry of Women Affairs and Office of the Wife of the Governor.

While speaking in court, the FIDA Chairperson, Bola Joel-Ogundadegbe, stated that what was done in court was just for the defendant to appear before the court, noting that the defendant has not properly been arraigned.

Also, the Special Assistant to Ondo State Governor on Special Duties, Henry Adegbemile who was at the court said that “the position of the law is that he is entitled to the application requesting and seeking the order of the court to remand the suspect.

“Since the administration of criminal justice law allows him to respond to that application, the court is of the view that between now and the time he was served will not be sufficient for him to respond, even though he could respond orally, but he has since selected to have a legal representative.”

The authorities of the Nigeria Army had dismissed Awolola over the alleged rape incident and handed him over to the State Police Command for prosecution.

The 33-year-old suspect attached to the 32 Artillery Brigade, Akure, was alleged to have raped a female student of the Department of Religious and African Studies of AAUA on July 31st the military checkpoint situated in Ikare-Akoko in Akoko North-East Local Government Area of the state.