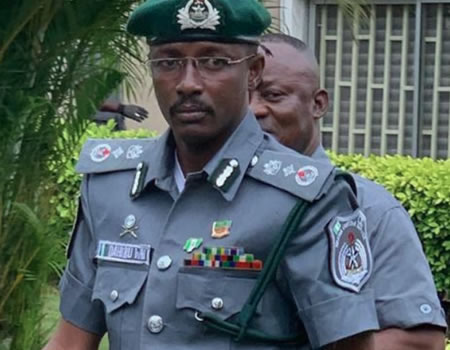 An unstable Assistant Superintendent of Customs (ASC1) of the Nigerian Customs Service (NCS) attached to a command in Katsina State, Nura Dalhatu on Monday resumed at the Customs headquarters wearing the rank of a Deputy Comptroller General of Customs.

This is even as the NCS revealed that the said officer is presently being attended to by medical doctors.

According to findings, drama erupted at the NCS headquarters in Abuja on Monday when ASC1 Nura Dalhatu from Katsina state appeared with the rank if the DCG of Customs and visited the comptroller General, Col.Hameed Ali (rtd) in his office.

When contacted, the NCS Spokesman, Joseph Attah explained that the said officer, after interrogation, sounded in unstable and is being attended to by medical doctors.

According to the NCS Spokesman, “From questions and answers that followed, it was obvious that he was not in the right frame of mind, so a Doctor was immediately invited.

“He is presently undergoing a medical examination at the medical unit of the service.”