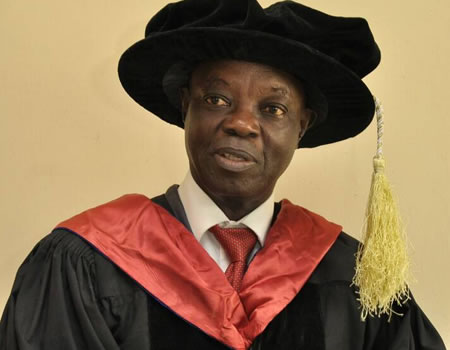 Prof. Sulyman Abdulkareem, the Vice-Chancellor of the University of Ilorin, has said the institution was committed to enhancing academic endeavours and understanding the unique history of Ilorin emirate.

Abdulkareem stated this on Thursday in Ilorin during the Book Launch and Award Presentations by the Centre for Peace and Strategic Studies of the University.

The book was entitled:” Human Security and the Survival of Ilorin Culture”.

The Vice-Chancellor stated that the University believes in sustaining the mutual benefit between the host community and the academics.

He added that the Centre for Ilorin Studies was as a result of international best practices of strengthening the relationship with immediate communities.

Abdulkareem added that it is an opportunity to immortalize the works of great scholars associated with the birth of any other lineage with Ilorin.

In her address, Dame Pauline Tallen, Minister of Women Affairs, said that the title of the book is apt, as security implies freedom from danger, encompassing measures put in place to safeguard lives and property from harm or loss.

She pointed out that most times women are at the receiving end during the conflict, adding that women’s contributions to conflict resolution cannot be overlooked.

“The women peace and security agenda promote the view that effective incorporation of a gender perspective and women’s rights have a positive impact on the lives of everyone in the conflict area,” she said.

Dr Ibrahim Jawondo, the Director of the Centre for Peace and Strategic Studies of the University, said the centre is charged with the responsibility of collecting, cataloguing and preserving Ilorin-related studies, in form of an artefact, manuscript and publications.

He also explained that scholars have discovered that the history of Ilorin Emirate is connected to the history of different groups in Nigeria and beyond.

“Ilorin is not only regarded as a cultural melting pot, a local Mecca but also a super diplomat whose influences have spread far and wide and is indelible,” he said.

News Agency of Nigeria (NAN) reports that highlights of the programme include the presentation of meritorious awards to Sen. Bola Tinubu, Alhaji Sani Zangon-Daura and Alhaji Abubakar Kawu-Baraje among others.

Minister calls for legislation to curb spread of Aflatoxin in Nigeria