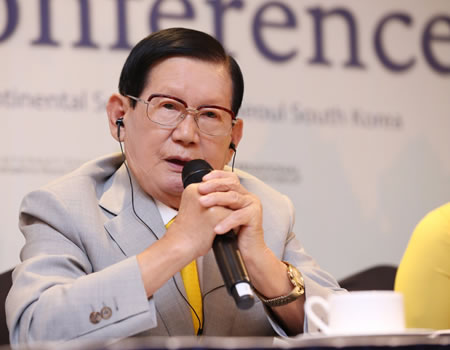 CHAIRMAN, Heavenly Culture, World Peace, Restoration of Light (HWPL), Man Hee Lee spoke with journalists across the globe at the just concluded 3rd Annual Commemoration of the World Alliance of Religions’ Peace (WARP), in Seoul, South Korea.  He spoke on wide range of issues of conflicts and wars of the globe such as the Korean crisis and refugees from Syria. Tunde Ogunesan was there, excerpts:

How do you plan to cooperate with the United Nations to achieve global peace?

We all want peace and that’s why we are here today. Something is needed to achieve peace and stop wars. In this regard, the HWPL International Law Peace Committee was organized with experts in international law. After a series of meetings in London, the Declaration of Peace and Cessation of War (DPCW) was drafted and proclaimed. But this was not enough. The work of peace is not given to an individual or company, but to everyone in the globe. HWPL as a peace organization under both UN DPI and ECOSOC is seeking to build cooperation with the UN focusing on cessation of war and global peace in a way that everyone in our globe can participate in this work of peace with the same heart of peace.

What is the HWPL plan to achieve peace between South and North Korea in the context of North Korea’s nuclear test and war?

Chairwoman Nam Hee Kim of International Women’s Peace Group (IWPG) often says that the work of peace puts a period at North Korea as the final destination of peace. The country does not listen to anyone, and even any powerful countries cannot make influence; the country does not even blink an eye. How can we deal with this reality? We should resolve the issue through communication. HWPL has left steps in every part of the globe, from Cape Town to England, and from the America to Chile. The purpose was for the cessation of war and peace in the global community. Through the visits, we met heads of state, government officials, and journalists to communicate and promised to work together for peace. I believe the ice frozen until now can be melt as we start to talk with the people in North Korea.

However, this should not be said carelessly. Those who live in the country are also human beings. We should turn their hearts, let them feel peace is good and necessary for them, and work for unification. Everyone, the people in this Korean Peninsula share the same language, the same ground. We are the same people but divided into north and south. Do you think Korea was divided by the intention of our people and our ancestors?

Think about this with wisdom. All the citizens in both the North and South want unification. Why should the two be divided? We should turn our guns away from each other. It is an irony that we go to other countries, but cannot go to a place of people with the same identity. When we begin to come and go, that is unification. Leaders in both sides should begin to discuss the work of unification. Why should we invest in the military spending? The unification will be possible through talks.

What outcomes can we anticipate from this the 3rd Annual Commemoration of the WARP Summit?

The purpose of this event is to awaken and better recognize the idea of peace. This event is not being held just in Seoul, but in many countries. It’s not just one venue in South Korea. You will see. This is a global event with many countries in the world, not just Seoul.

When we read news articles, it is all about this ground burnt with the sea of fire that threatens the global society as a whole, which everyone worries about. I see we are from many different countries for the reason – peace and cessation of war, and to get rid of weapons to kill life. Do you think peace can be achieved without eliminating such weapons? I ask you again.

When a war breaks out, who is going to the front line? Your children, So many people are born in the same world, the same ground, at the same time, but they have to be sacrificed in battlefields. Did laws in countries compensate this? The real compensation should be “turning things into the original condition.” Is the policy perfect for compensation? Am I wrong about this?

We should have values as human beings and do something as human beings. Look at the infinite universe. Is there something like the earth? Our globe with life is given to us, so we are responsible for protecting the globe.

Thinking about our world, there are weapons to get rid of a few planets like the earth. With this condition, can we actually say to our children, “I hope you have a good life?”

This is why the DPCW with 10 articles and 38 clauses was drafted – to stop wars and establish peace. We can do this. Why do we have to refuse? If journalists can contribute to peacebuilding, thoughts of people, especially politicians will change, so I have high expectation in journalists.

We hear a lot about terrorism and other violent activities occurring throughout the world. Through what methods can we let the world, especially religious groups, hear the voices of peace and respond to the culture of peace?

Religion should be the light in the world and lead the world in a good way. Then why should the war caused by religions account for 80 percent? That’s why the name is the WARP Summit. In the summit we promised something in front of the people in the world; politicians shall work for international law for peace and religious people shall be one not to divide and bring conflicts. And leaders of civil society shall urge cooperation to implement peacebuilding.

To do this, HWPL has established the WARP offices to have meetings for religious leaders around the world. What do you think is the reason that religions are broken apart? The difference in teachings from the scriptures that guide people’s way of thinking. So, religious leaders need to get together to find out what can be the standard of trustworthy scriptures. This work in the WARP offices is in operation.

Peacebuilding: 3.6 billion women in the world have a role to play ―IWPG Chairperson Kim

IPOB proscription: CSO protest in US Embassy over ambassador’s comment