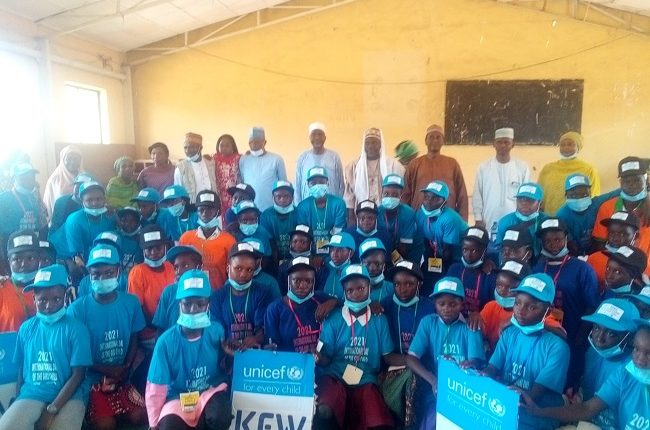 As part of activities to mark the 2021 International Day of the Girl Child, the Adamawa State government with support from UNICEF has flagged off a three-day intensive digital training for 50 selected schoolgirls.

Speaking during the flag-off of the training in Yola on Saturday, UNICEF Education Consultant, Mr Joel Jutum, said that ten girls each were selected from five local governments in the state.

According to him, the local governments include Fufore, Guyuk, Hong, Yola South and Yola North.

He added that “at the end of the session, ten girls with the best results will be selected. Five of them will again be selected to represent Adamawa State in Abuja and the other five will remain in the state for further training.”

He added that UNICEF is particularly concerned about the plight of the girl-child because of their vulnerability and harmful treatments they suffer in the society.

Jutum said that so far, three states in the North-East including, Adamawa, Bauchi and Gombe have been selected for the program.

He also said that the best girls selected both in Abuja and Yola will be sent to various MDAs where they will be made to take up policy positions.

Also commenting, Adamawa State Commissioner for Education and Human Capital Development, Mrs Wilbina Jackson, said that the state government is committed to the success of girl-child education in the state.

Jackson who was represented by the Director, Human Capital Development, Muktari Tukur, indicated that the state has attained over 70 percent compliance in ICT literacy in its schools.

She added that in order to enhance universal coverage, Adamawa State has instituted free and compulsory education policy for all which has led to more enrolment of the girl child.

“In Adamawa State, as a government, the administration of governor Ahmadu Umaru Fintiri has come up with free education policy among some other reasons to reduce girl-child early marriage.”

She added that, oftentimes, girls are given out for marriage at a tender age, due to lack of financial capacity by their parents to pay school fees, unlike their male counterparts.

In her comment, Chairperson, High-Level Women Advocate (HILWA), Adamawa State, Dr Jiddere Musa Kaibo, encouraged the girls to study hard and serve as good ambassadors of their families, noting that a woman has to put four times the effort of a man before she can achieve the heights a man attains.

She urged the state government to give women employment opportunities so as to encourage their enrolment in schools.

In his remarks, the chairman of Adamawa State Universal Basic Education Board (ADSUBEB), Dr. Salihi Ibrahim Atiqu, called on the girls to take the advantage of the exercise to better their future.