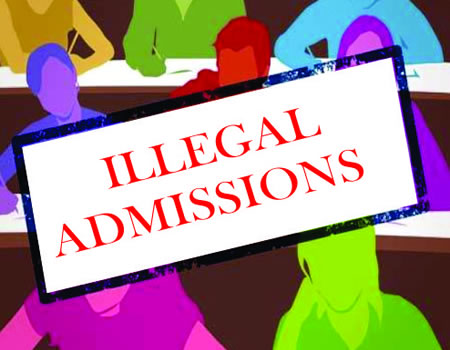 THE Vice-Chancellor of University of Abuja, Professor Abdul-Rasheed Na’Allah, has vowed to prosecute those behind the running of an illegal pre-degree programme on the university campus, through which many parents and admission seekers were defrauded.

He, however, disclosed that the programme, which was fraudulently introduced by a consultant with some staff without the approval of the university senate, had been shut down.

Na’Allah, who is barely four months in office as vice-chancellor of the university, said even though the illegal programme was in operation before his coming, he had ordered thorough investigation into the alleged scam because he keeps receiving complaints from parents and victims.

He revealed that the illegal programme was run under the auspices of Joint Universities Preliminary Examinations Board (JUPEB), even when the university senate at the time rejected a memo from the director of a programme in the university seeking approval for the pre-degree programme.

Bature: The Sokoto boy who set a new record at NDA

Na’Allah said he would work with anti-graft agencies such as the independent Corrupt Practices and other Related Offences Commission (ICPC), the Economic and Financial Crimes Commission (EFCC), the Police and the Directorate of State Security Service (DSS) to fish out perpetrators of the scam.

“I want to be very thorough; nobody will get away with acts of indiscipline. And I am going to work with any organisation, including ICPC, EFFC, the police and DSS to root them out whoever they are and wherever they may be.

“We can never allow anybody to damage the image of our nation and this university.

“We will make sure that nothing is swept under the carpet. Anybody who has done wrong, will be handed over to the police or DSS and we will pursue them to the end. We must protect this university from criminals,” he said.

He described the exploitation of young Nigerians and their parents who are determined to ensure their children get university education as unfortunate, stating that it does not make sense for anyone outside the university to claim to be running a programme for the institution.

According to Na’allah, he became aware of the illegal programme which promised admission into the university when he resumed office and received complaints from parents and students who had been scammed.

Earlier, the Director of the School of Advanced Basic and Remedial Studies, University of Abuja, Professor Abdul Buba, further clarified that the illegal programme did not receive approval from the university senate despite attempts by its operators to do so.

Buba said the consultant and the unit however defied the decision of the senate and went ahead to register students under the School of Avanced Basic and Remedial Studies, collecting huge amount of money from parents and students which was not disclosed to the university.

He said JUPEB did not also approve of the programme, stating that JUPEB programme was run only within affiliate institutions.

He said the university has set up a committee to investigate the issue to ensure that  perpetrators were brought to book.

Buba, however, said the senate of the university in May, approved the School of Advanced Basic and Remedial Studies, adding that the programme also received the approval of JUPEB to legally run the programme from the 2019/2020 academic session.

Cutting down of trees in Abuja attracts fine of N100, 000 per tree —FCTA