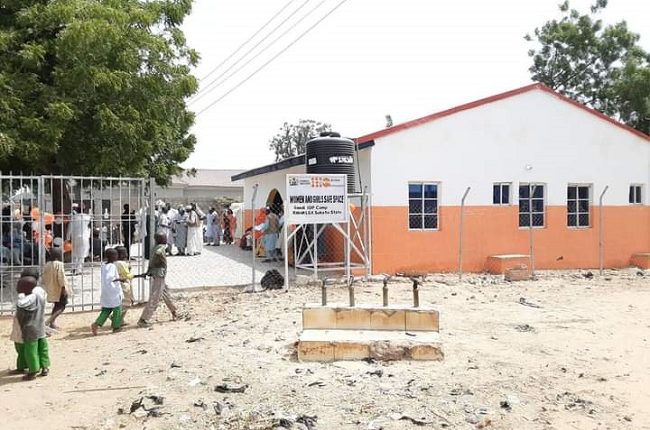 Mrs Aisha Dantsoho, the state’s Permanent Secretary, Ministry of Women and Children Affairs, said during the inauguration in Sokoto on Thursday, that the centre was a landmark achievement for women and girls.

Dantsoho said that the ministry and donor agencies visited the IDPs camp and discovered the disturbing situations of women and girls affected by banditry, and decided to look for a safe space for them.

She added that “the centre was established to cater for vulnerable women and adolescent girls’ health, empower them and give them psychosocial counselling.

“IDPs experience different forms of violence and trauma as a result of banditry; some women lose their husbands and children in confusions during attacks and continue to wander without any assistance nor roof over their heads.”

The permanent secretary said different packages of support were given to the women and girls, including foodstuff, sanitary pad, dignity kits and other life-enhancing items.

According to her, the situation of women and children who face relationship difficulties prompted the creation of the safe space centre.

She expressed optimism that the centre would allow women and girls to interact freely, learn different skills and other developmental programmes.

The UNFPA Representative, Toyin Adelugba, said the Women and Girls’ Safe Space was established and supported through an Emergency Fund.

Adelugba said it was targeted toward case management, including referral support, social cohesion and life-skills to affected women and adolescent girls.

“For more than two decades, UNFPA and Sokoto State Government have been in partnership to

“UNFPA supported the government in essential supplies to ensure the sexual and reproductive health rights of the people and assist in health infrastructure development through the construction, rehabilitation and equipping of certain primary health facilities in the state.

“The Fund has been supporting the initiatives of the Sokoto State Government in ending GBV,

including harmful practices such as Female Genital Mutilation and forced or early child marriage to promote gender equality and women empowerment,” Adelugba said.

Mr Ibrahim Ahmad, the IDPs Camp Manager, said there were more than 3,200 women and girls in the camp, noting that the centre would surely enhance their living condition.

The community leader, Alhaji Ibrahim Yari, also the Marafan Gandi, thanked the UNFPA for establishing the safe space and assured the community’s assistance toward keeping the centre safe.

Did You Know about Various Health Benefits you can achieve from gambling?