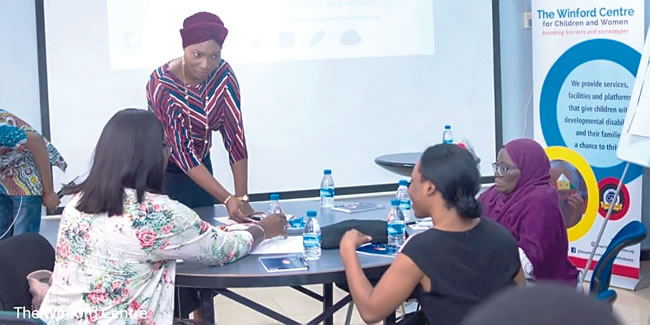 THE Special Education Needs and Inclusion Conference (SENICON), originally scheduled for 23rd of April in Lagos by The Winford Centre Children and Women, was postponed as a result of the COVID-19 pandemic. However, about two months later, on 12th of June, the centre decided to host the conference online, via Zoom platform.

Explaining why the conference held in the face of the pandemic, the founder of the centre, Basirat Razaq-Shuaib, said, “The inclusive education problem the conference seeks to solve requires solutions, whether there is a pandemic or not.”

SENICON is an annual conference, and its maiden edition was held this June. The theme of this year’s edition was ‘Increasing access to education: Innovative solutions for learning and participation’. The conference, which was supported by United Nations Education, Scientific, and Culture Organisation (UNESCO) and Bridg-Networking Germany, attracted over one hundred and sixteen policymakers, education practitioners and beneficiaries to explore innovative and sustainable ways of supporting learners with special education needs in the future.

In her welcome address, Razaq-Shuaib highlighted the crucial need to have conversations with all key stakeholders about the importance of finding solutions to increase access to education and improve learning and participation for children with disabilities and neurodiverse conditions so that they can be functional and contribute positively to the society.

Razaq-Shuaib charged the participants to have an open heart towards learning and understanding that children with special needs can be supported to access education. She reiterated the need for increased actions towards ensuring that Sustainable Development Goal (SDG) 4—Equal and equitable access to education for all—is achieved.

Delivering the first keynote address, the Regional Director and representative of UNESCO, Mr Yao Ydo, represented by Dr Samuel Onyekwelu gave a background of special needs education. He stated that an estimated fifteen per cent of the world population have a disability; and that one in every ten children is a child living with disability. He further stressed that out of an estimated one billion people living with disabilities, eighty per cent of them are in developing countries, which Nigeria is one of.

“The global crisis of COVID-19 pandemic is deepening existing inequalities and exposing the extent of exclusion,” Onyekwelu lamented, “Work on disability inclusion has become imperative, making this conference a very important one.”

He explained the role UNESCO is playing in Nigeria to support inclusive education policy reforms, practices and knowledge sharing, citing examples of their programmes such as Inclusive Education in Action, teacher training and awareness campaigns, amongst others.

“Our policies must include the needs of disabled persons and our school structures must be accessible to visual, hearing, mobility and intellectually impaired persons,” he said. “Accountability is important. There should be clear and achievable objectives to hold policymakers accountable, especially in terms of governance.

Delivering the second keynote address, Mr Phil Dexter, an inclusive education consultant, who was with the British Council for 30 years, said we must recognise that every learner is different and that they must be related with in different ways.

He stressed the importance of going beyond labels such as dyslexia and others, and getting through to the learner to support them. He said that the strategies for supporting learners with special education needs are equally useful for all learners.

“There is need to move away from the medical model of disabilities to the social model,” he stressed, “where we are not only focusing on equity but giving affected learners a chance to make their own choices regarding what they want to learn.”

The final keynote of the day, was delivered by the Lagos State Commissioner of Education, Mrs Folasade Adefisayo, represented by Mrs Sola Somoye, the Director General of Guidance and School Counselling, Special Education, Ministry of Education, Lagos State.

In her address, she noted that the Lagos State government has been and remains committed to supporting the education of children with disabilities in the state. She said the conference was an eye opener for the government in terms of its provisions and services, adding that the result of the poll taken during the conference revealed that there are still so much to be done.

She shared some of the challenges the state is experiencing, and asked UNESCO to look at extending their support to the state. She promised to take the key lessons from the conference to the education commissioner in order to shape their provisions.

At the conference, participation was monitored through comments and questionnaires. There were parents of children with disabilities in attendance, and one of them was a speaker.

The highlight of the day was the unveiling of four children’s books promoting inclusive education, disability and neurodiversity awareness, and social inclusion of children with disabilities. The first book, ‘Dragons Can Sing’, was unveiled by Dr Stephen Onyekwelu on behalf of UNESCO Regional Director, Mr Yao Ydo.

In his words, UNESCO appreciates innovative actions, research work and ideas that are in line with their thinking, which the book represents. He added that the book will address some of the issues that have been highlighted relating to disability inclusion.

Dr Hannia Bridg of Bridg-Networking, Germany, unveiled the German, Spanish and Portuguese translations of the children’s book ‘I Am Not Naughty: I Really Really Mean It!’ which was originally released in English in 2019. The book, which emerged as a finalist in the 2020 British Council ELTons Innovation Awards (in partnership with Cambridge Assessment), has been deemed an excellent resource for teachers.

Dr Bridg discussed the key issues faced by children with disabilities, their families and the people around them, all of which were highlighted in the book.

“The issue of inclusion and children with disabilities is not peculiar to Nigeria,” she said. “It’s important to ensure that the message of this book is spread to other parts of the world where it’s very much needed.”

She noted that Bridg-Networking will continue to work to foster the exchange of ideas and services between Germany, Latin America and Nigeria in the areas of bioscience research, genetics testing and inclusive education provision for children with disabilities and neurodiverse conditions in Nigeria.

The author of the two books, Basirat Razaq-Shuaib, explained the importance of having books which explain disabilities to children, adding that, “If children are not taught about inclusion, they will grow up into adults who don’t understand or practice inclusion, and the cycle of exclusion and discrimination won’t stop.”

In her closing remarks, Basirat Razaq-Shuaib charged the government to treat the provision of inclusive education for children with disabilities as a priority problem rather than as an add-on after all other problems have been solved. She encouraged teachers and educators to have open minds and be flexible when it comes to supporting learners with special needs.

Conversations to have in a platonic relationship