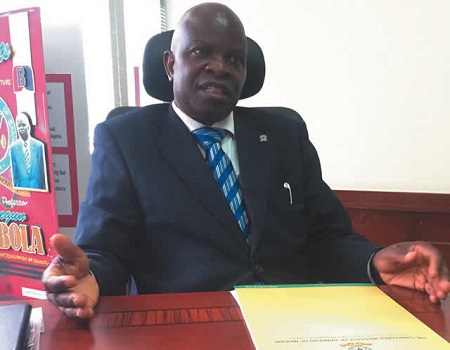 The Former Chartered Institute of Bankers of Nigeria (CIBN), Prof Segun Ajibola has disclosed that the two evils bedevilling the tax system in Nigeria are price instability and unemployment.

Ajibola noted that the country would get it right when there is a reduction in the unemployment and inflation rate in the country.

He stated this at the Annual Tax Week entitled “Bridging The Information Gap, with Regards To Taxation And Allied Matters on Vi-Lekki Epe Axis”, organised by the Joint District Society of VI- Lekki Epe axis, held recently in Lagos.

“There are two evils affecting the effective operation of the tax and tax system in Nigeria- Unemployment and inflation.

“The man that is unemployed doesn’t earn income and cannot pay tax. And when inflation stares a country in the face, the real value of money goes down.

“So, the ability to meet basic needs has been weakened due to the loss of value of money.

“So, you see a situation where somebody is not so much empowered and value is being lost from the little money he is generating,” he said.

Moreover, Professor Bola added inaccurate statistics and perception towards infrastructural deficiencies in the country to the problem of avoiding tax payment.

He urged the government to be responsible and responsive to the provision of the necessary amenities.

“We don’t have accurate statistics about who is who and who is where. So, there is an identity problem either in terms of individuals or businesses and business enterprises.

“So, it is easy for some to disguise. They are in business, they make good money but because of identity issues the official architecture does not capture them. So, that is one major problem.

“The second problem is that there is the thinking that tax, taxation and tax proceeds should be an instrument of development. In order words, it should give back to the people.

“I know that much is not being done in that area because of corruption and corrupt practices and tax proceeds go to individual pockets rather than helping to provide the facilities in terms of infrastructure to generate employment and also help to sustain the momentum of roads.

“So, right or wrong, when potential taxpayers have that kind of mentality, the next thing is apathy towards meeting tax obligations.

“So, it is a two-way problem- taxpayers and the government. To bridge the information gap, it is for the government to be responsible and responsive to the people” Ajibola said.

Speaking also, the President, CITN, Dame Olajumoke said just recently the Federal Government signed into law the Finance Act Bill and as a result of that there are so many issues that should be looked into.

Dame, who was ably represented by the Institute’s Council member, Mr Kolawole Babarinde, said the issue of fiscal policy is of interest to the practitioners and the topics discussed critically as experts would know what to do.