Under the siege of bandits 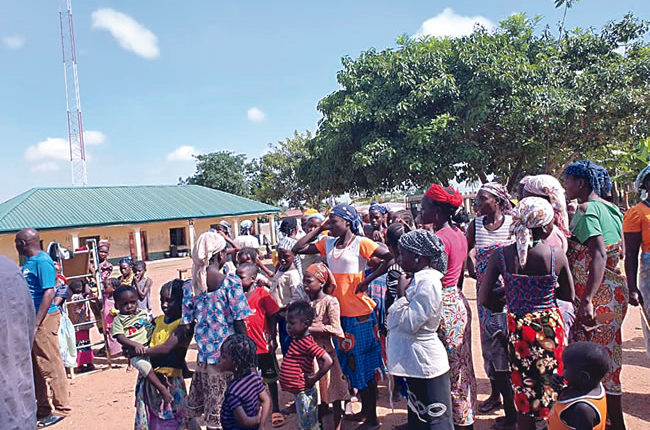 ADELOWO OLADIPO reports that the threat of bandits’ attack in Niger State has forced a stakeholders’ meeting, among other efforts by the state government hoping to bring the increasing number of Internally Displaced Persons in the state under control.

Niger one of the states in the North-Central zone of the country currently being ravaged by bandits’ attacks. Despite all efforts by the state government to keep the attacks in check, the level of success has been very low.

On the other hand, the number of victims has been on the increase with victims having nothing on them whenever they arrive at Internally Displaced Persons camps, except the clothes on their backs when the bandits attacked. The effect is that, today, the Niger State government is at the mercy of the bandits while looking up to the federal government to create more IDP camps to accommodate the teeming masses of displaced persons.

As of today, there are no fewer than 2000 women and children needing shelter across all the affected local government areas. Even the National Refugees Commission has been contacted by the state government to help out in the effort to accommodate the helpless women and children.

The state government has therefore appealed to the chairman, National Refugees Commission, Alhaji Abubakar Lado, and the federal government to include Niger State among four other states in northern Nigeria  such as  Zamfara, Yobe  Borno and Katsina in their plans to create more IDPs camps.

So serious was the problem of bandits’ attacks in the state that it was top on the table recently at a  critical stakeholders meeting conveyed by the Minister of State, Foreign Affairs, Ambassador Zubeiru Dada,  at the Conference Hall,  Government House, Minna,  in collaboration  with the deputy  governor, Alhaji Ahmed Mohammed Ketso, members of the National Assembly, state House of Assembly, youth and women  organizations, Christian and Muslim leaders and other community leaders in the state, among others.

The Special Adviser to Governor Abubakar Sani Bello of Niger State on Greenhouse Development, Hajiya Hadiza Ibrahim Kuta, had told newsmen at the event that the state was one of the states in the North Central zone of the country which had been battling with the problem of bandits’ attacks in the past one year, having started on a low scale but has since escalated into a major crisis threatening to snowball into a major source of mass dislocation of the local population.

Hajiya Kuta noted with concerns that many of the IDPs have been in the camps across the states for over 10 months, adding that “the number increased as the attacks on the communities increased. Families have lost loved ones, their homes and farms, while all their belongings and even some of them have no clothes to wear, as they have had to flee with nothing.

“In fact, some of them have had their houses and food stalls burnt down completely by the rampaging bandits and for these reasons they really need some form of reintegration plans. Please we are begging the federal government and the Refugees Commission for assistance”.

“Though the available IDPs camps have been populated with the displaced people, arising from there is the burden of feeding them, taking care of their medical bills and all sorts. This called for concerns because I know in Niger State, the state government has been battling with several issues. We need resettlement urgently for the IDPs so that their children can go to school,” she added.

Furthermore, stakeholders had also at the meeting advised the federal government to increase its efforts at rehabilitating federal roads in the state.

“The federal government should as a matter of urgency declare a state of emergency on federal roads in Niger State,” the stakeholders said, adding that the high rate of insecurity in the state has made the youths jobless which could lead them to go into crime.

The stakeholders also decried the epileptic power supply by the Abuja Electricity Development Company (AEDC) in the state which they believed had crippled small, medium and large scale enterprises in most parts of the state, thereby throwing young people into the labour market.

Sunday Tribune recalls that Governor Bello had in September ordered the immediate suspension of all mining activities in different areas of the state where bandits’ attacks had been serious.

The decision had become important in the face of security, health and environmental hazards, as well as illicit drug peddling concerns in the affected areas.

According to the state government, investigations had “clearly established a strong and glaring nexus between the activities of bandits, prostitutes, criminal gangs and illegal miners, with each mutually re-enforcing the other.”

While all hands are on deck to checkmate bandits’ attacks, the state government might need to do more with a multi-pronged approach to bring the situation under control.

Why agitations will continue to grow in Nigeria —Theodore Orji