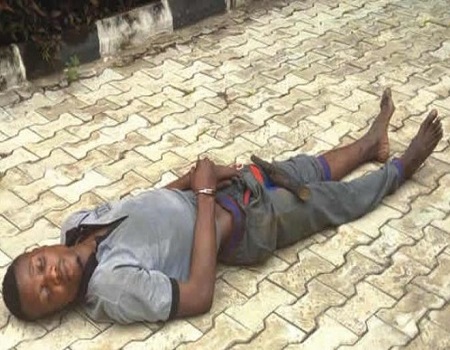 TEN days after the arrest of an unconscious member of a kidnapping syndicate in Owo, Owo Local Government Area of Ondo State, the suspect on Tuesday morning succumbed to death.

The state Police Public Relations Officer (PPRO), Femi Joseph, who disclosed this to journalists in Akure, said the suspect passed on in his sleep, following the complications from a high intake of Tramadol.

Joseph said the suspect who had been unconscious since his arrest has been receiving treatment at the hospital, saying he was administered with over 30 drips at the hospital before his death on Tuesday morning.

According to the PPRO, the medical personnel at the hospital battled to receive the suspect but said the quantity of the intake of the banned drug has damaged his system and failed to survive it.

He said “the suspect died after being in our custody for about ten days. He took a lot of this dangerous drug, Tramadol, and we have to take him to the hospital and he has been at the hospital since then.

“As a matter of fact, he took over 30 drips at the hospital but fortunately for him, he gave up the ghost and the report indicated that the drug has a devastated his body system to the extent that he cannot make it.

“This is a lesson for our youth, even though we are not happy he died because he would have helped us in our investigation to further apprehend the other fleeing suspects.

“We are using this opportunity to further educate the public, especially parents, to monitor their wards and the kind of company they keep.’’

The suspect and his gang invaded a Pharmacy in Owo township with the intention of kidnapping the pharmacist while the victim raised alarm to attract peoples attention.

The suspected kidnapper, however, snatched a Bajaj motorcycle to escape from the scene of the incident while the unconscious suspect was nabbed while sleeping at the scene.

One cut to size locally-made gun and 400mg of Tramadol were recovered from the suspect and was said to have slipped into coma since his arrest until his death yesterday.

Three kidnapped along Benin-Lagos road as Edo police rescue one