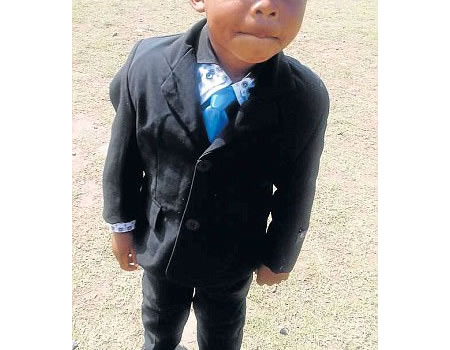 A trusting youngster was snatched by an uncle said to be involved in witchcraft who is accused of skinning him then drinking his blood and eating his heart.

The evil killing of the four-year-old boy has rocked the village where he disappeared after his grandmother tracked him down to a blood-soaked house of horror.

Kamvelihle Ngala, 4, had gone missing while out playing with friends and his grandmother Nontuthuezelo Gwanya, 70, began a search through the night.

The grandmother’s sister then tipped her off her to check for the missing boy at her son’s house saying she feared he was ‘in the grip of Satan’ and ‘did not trust him’.

When she knocked at the door at 2am her nephew would not let her in so she forced it open and her screams at what she saw brought villagers running.

Nontuthuezelo told reporters: ‘I thought a pig had been slaughtered there was so much blood and then I saw the hand of my small boy and pieces of meat.

‘He confessed to me that he had eaten the child’s flesh.

‘My grandson did not deserve to die like that, especially at the hands of a family member who was supposed to protect and love him’.

Police returned and broke down the door and arrested the 30-year-old man inside the blood soaked home and recovered many body parts from the boy.

Neighbours said the boy’s ribs were on a sideboard and his skull had been skinned and split in half and remains of his brain were by a salt shaker.

Police spoksman Captain Nozuko Handile said the suspect had recently been released after seven years in prison for murder after serving his sentence.

He was arrested at the house and charged with the murder of the boy.

She said: ‘Nontuthuzelo got a call from some family members that she must also look at the house where another relative lived to find her grandson.

‘Nontuthuzelo went to her nephew’s house and pushed opened the door. The room looked like a slaughter house. There was just blood everywhere.

‘The body of Kamva was on the floor cut to pieces. It was a scene like when one slaughters a sheep for a ritual.

‘The body was carefully skinned and so was the skull which was away from the child’s body.

‘He told the villagers and police he drunk Kamva’s blood and ate his heart and brains. The skull was clean with eyes gouged out and skin taken away.

‘This was like slaughtering sheep or goat for a ritual. A liver was in another dish with one hand’ said traumatised Xakana.

Village elder Mte Saleni, 75, said: ‘When people are on drugs they are uncontrollable. What people saw in that flat will haunt them forever’.