Real EstateProperty and Environment
By Dayo Ayeyemi On Oct 27, 2020 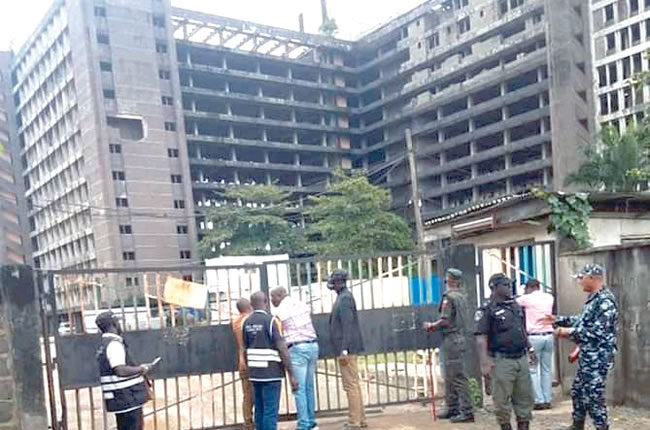 Lack of activities in the real estate industry as a result of downtufa in Nigeria’s economy, effects of COVID-19 pandemic and uncertainties in the business operating environment, is weighing down on possible recovery of the sector. Dayo Ayeyemi reports.

THINGS are not looking up the way they should in the  real estate sector, having been in negative territory for  15 consecutive quarters since 2016.

Two months to the end of 2020, the sector is still  sustaining the trend.

This time however, the situation is further worsened by  the nation’s  harsh  economic climate, COVID-19 pandemic and ongoing   youths’ protest on police brutality  with associated destruction of public property, looting of malls, warehouses., among others.

Speaking with the Nigerian Tribune at the weekend, many professionals in the built environment  expressed pessimism over possible recovery of  real estate sector until the end of first quarter of next year.

Former President, African region,  International Real Estate Federation (FIABCI),  Mr.  Chudi Ubosi, said Nigerians would spend the rest of the year cleaning up, threading water, stressing that very few people would want to or could make or take investment decisions in an unstable environment as we have currently.

“ I imagine it may stretch far into the first quarter,” he said.

Ubosi,  a real estate consultant and Principal Partner, Ubosi Eleh and Company, cautioned Nigerians not to be surprised to see a lot more divestments “as people ponder at their vulnerability and the vulnerability of their investments.”

Depending on level of investment, the estate surveyor and valuer stated that  large retail malls would have to wait, adding that nobody was  interested  in packaging investment again this year.

“Real estate is in a mess, but we will still eat oo. The market is totally messy. People are already looking at next year,” he said.

Explaining, he said that demand for office accommodation had reduced drastically as most workers  worked online due to COVID-19’s  effect .

Besides,  he pointed out that there was  no money in circulation yet to put into real estate.

Okupe said: “The focus of most families now is how to stay alive and not go hungry with the rising food prices and cost of living.

“Manufacturing concerns do not have access to good capital. Cost of building is rising, while cost of tenancy is not rising. Most landlords are battling with tenants debts. There is no ncentive to build new houses.”

“We are on holiday. We will resume in 2021. Pandemic to EndSARS protest have made the sector not  to deliver at the fullest,” he stated.

Former  Chairman,  Estate Surveyors and Valuers Registration Board of Nigeria,  Elder Williams Odudu, said there could be  very little hope of recovery if the revolution is stopped..

“If the revolution is stopped, meaningful recovery will take some years. That will depend on who is in control of government at the centre,” he said.

According to the former Managing Director, Lagos State Development and Property Company (LSDPC), Mr. John-Bede Anthonio, Nigerian economy had been in recession and  that, in any recession, real estate sector remained the first casualty.

Secondly,  he pointed out that government’s efforts to stimulate the economy were timid and was more like winking to a girl in the dark; “you know what you’re doing but the girl can’t even see you in the dark.”

According to him, real estate is for  Nigerians but that  people have lost faith in their rulers, as seen by the ENDSARS protest, adding that  “government is financially bankcrupt and lacks ideas,and human persona.”

Executive Secretary, Association of Housing Corporations of Nigeria, Mr. Toye Eniola, remarked that certainly, there was  no hope for recovery of the real estate sector  this year.

Former President of the Nigerian Institute of Building, Mr. Chucks Omeife, said it was most unfortunate that just  as Nigerians were sliding out gradually out of COVID-19 issue, thie #EndSARS protest became the latest development and took over from the new normal people  were still learning to get used to.

“The issue of housing has once again been thrown back to the individual/collective/ corporate/governance reserved list,” he said.

According to him, housing development is a reflection and sign of growth in a country’s development stride.

As it is, he said that nobody was  focusing on the issue of housing  due to  urgent need for individual survival.

On a large scale, he pointed out that housing could however be used by government to rejuvenate the economy by flagging off those already planned development initiatives that had been programmed before the issue of COVID-19.

“While jobs has been lost as a consequence of the endemic , more jobs will be lost due to the level of carnage perpetrated by hoodlums that hijacked the #Endsars protest nationwide,’ he said.

As the year close to an end, Omeife is of the opinion that effectively rolling out the government’s housing plan could assist in reducing the general hardship in the country as “housing can provide a wide range of engagement for artisans and craftsmen as well as suppliers and producers of building and construction materials.”

This, the former  NIOB  boss said could trigger a rejuvenation of the economy and  impact the beginning of the new year.

He said : “As at today, the real estate sector is in comatose and will need government ability to provide a peaceful and secured environment to jump-start the gradual process of recovery.

“Investors are also watching by the sideline to see how all these will end which will determine the earliest time of the sector reawakening. The earlier the government can start to put in place the process of providing this enabling environment the better for the sector..”

“We will continue to pray for peace in Nigeria because there is no development without peace,” he said.

Taking a look at activities  in the sector in Q3,  Bamgbade, said that nothing significant happened in real estate industry in terms of growth, services, mortgage finance, and construction activities.

Not impressed with happenings in the sector, Bamgbade said he was not seeing any change before the end of the year in terms of growth.

He said: “Things will start taking good shape from next year. COVID-19 was a serious issue that crippled so many activities – construction related activities inclusive. Anyone who claims to have witnessed any economic growth in any form is a liar.”

Corroborating Bamgbade, Lagos-based  estate surveyor and valuer, Mr. Stephen Jagun, said there was not much happening, pointing out that  economy was not in good shape and that Nigerian currency  (Naira) has not picked up due to forex’s volatility.

“We are still consuming nation and we imported everything.  We operate  cash and carry economy,” he said.

For the rest of the year, Jagun, who is the Principal Partner, Stephen Jagun and Associates, said real estate stakeholders  comprising developers,  home buyers, professionals and  mortgage bankers should  not expect any major breakthrough, adding that  major construction activities had refused to pick up.

“To see major activities   in the sector right now,  government is expected to drive it,” he said.

On the industry’s outlook,, the Managing Director, Financial Derivatives Company (FDC) , Mr. Bismarck Rewane, in recent report, said that real estate sector would  continue contracting in Q4 of  2020 and Q1 of 2021.

Justify the projection, he stated that  demand  for real estate would  be constrained by virtual working and  structural displacement.

Besides,  he pointed out that commercial sub-sector  of real estate would be severely hit by remote  working and virtual learning trends.

“Tenants in large malls will struggle to meet rent/lease agreements as e-commerce becomes the new norm,” his analysts  said.

Analysing the impact of economic crisis on stakeholders in the sector,  FDC’s analysts  pointed out that foreign exchange’s volatility translated to higher import prices for developers.

Besides , they added that macroeconomic environment would  negatively impact the investment space.

To  asset owners/landlords, they said: “ This will lead to flexible lease negotiations, and mismatch for landlords who have dollar loans and naira income.”

The added that tenants would be on the hunt for flexible lease and tenancy  agreements.

Government must collaborate with stakeholders to drive developmental activities in the real estate sector.

The missed role of Amotekun…