UN pledges support to fight against corruption, insecurity in Nigeria 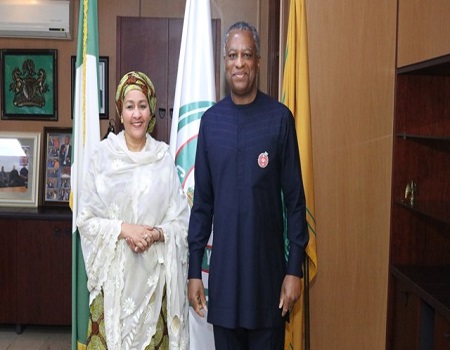 Ms Amina Mohammed, UN Deputy Secretary-General has pledged the support of the UN to President Muhammadu Buhari’s administration campaign against corruption, insecurity, and many other challenges confronting the country.

She made the pledge on Tuesday in Abuja, during a visit to the Minister of Foreign Affairs, Geoffrey Onyeama.

Mohammed said that the UN would continue to support Nigeria in fighting corruption which requires dealing with the root causes across all tiers of government.

She added that the UN would also support Nigeria in its effort to achieve the objectives of the Sustainable Development Goals (SDGs), address humanitarian and climate action challenges, as well as a multilateral approach to tackling challenges.

On the SDGs, she said that the General Assembly took some stocks on how it had fared for five years in but unfortunately, countries were not where they should be.

“We are considerably off-track across the globe, it is a global agenda. And as we come to Nigeria we will continue to advocate the decade of action which starts in 2020.

“On the humanitarian side, we know that this has continued to challenge not just Nigeria but the cross border issues, whether it is the Lake Chad or the borders with Niger or the North West of the country.

“This is a pressure on the region as a whole and we know that recently, your leadership at the ECOWAS is meeting to see how to address the conflicts within the Sahel and how to support the G5.

“We support your call for multilateralism. Over a couple of months, we have seen people taking to the streets because effectively, trust for institutions has been lost.

“This is where multilateralism is needed even more because the solutions to many of these issues that are global require us to lift them; they are beyond the capacity of only one country,’’ Mohammed said.

Mohammed also pledged the support of the UN to the Africa Continental Free Trade Agreement (ACFTA) which she explained was critical to achieving regional integration.

Speaking earlier, Onyeama expressed appreciation to Mohammed for the cooperation and support Nigeria was receiving from the UN and for her efforts at making Nigeria keep up with obligations of the SDGs.

Onyeama said that the priorities of Nigeria were in line with the focus of the General Assembly which relates to ensuring quality education, peace, and security, climate action, and inclusion as well as poverty eradication.

He stated that achieving such priorities would be synonymous with achieving the objectives of SDGs.

Onyeama also expressed appreciation for the support and intervention of the UN offices in Nigeria in addressing the humanitarian crisis in the North East and other parts of the country.

“We appreciate the support of your office and resident coordinator here and other humanitarian support.

“We have had some challenges from some NGOs in the North East but that has been addressed.

“And it has been acknowledged by interested parties and the agreements and Memoranda of Understanding that we have signed with their various partners in the North East.

“We are keen to press the reset buttons as regards to that and start afresh and really make sure we are on the same page working together toward the same objectives.

“We know that under the President of the General Assembly, the main focus of the UN for this year – quality education, peace and security, climate action and inclusion, as well as poverty eradication – are goals that we also have bought into – and are priorities for us.

“So we look forward to partnering with the UN in all of those areas/sectors in particular,’’ Onyeama said.