• pledges continued support to Gombe to address its challenges 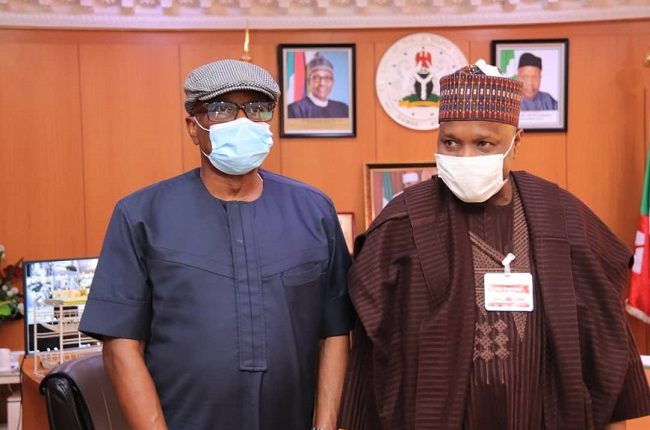 Gombe State Government has been advised on how best to survive the post-COVID-19 era towards socio-economic emancipation of the state amidst assistance from international donor agencies.

The advice was given by a team of United Nations delegation led by the Resident Coordinator, Ambassador Edward Kallon while at the Government House, Gombe on an official visit to the state on Tuesday.

While speaking during the visit, the UN Resident Coordinator, Edward Kallon commended the state for its comforting role to those displaced by insurgency and general disasters in the neighbouring North-Eastern states.

He said that “Pressure of insurgency and natural disaster in ravaged sister states in North East is seriously telling on Gombe, my presence here is to assure you that you are not alone, UN shall share your pains and burdens”.

The UN Chief further lauded Governor Inuwa Yahaya for allocating a grazing reserve for the Federal Government Livestock Transformation Programme which is aimed at addressing the incessant farmers/herders clashes.

The RC and his team had earlier held separate interactive sessions with some key members of the state executive council and civil society organisations based on some thematic areas.

In his address, Gombe State governor, Alhaji  Muhammadu Inuwa Yahaya said that his administration will continue to work in partnership with United Nations Agencies to address challenges bordering on education, health, agriculture, security and skills development in order to advance the course of humanity.

The governor described the composition of the visiting UN team as the calibre of professionals the state is desperately in need of to address the teething challenges confronting it.

He also said that his administration understands and appreciates the fact that unless critical issues affecting humanity are addressed and placed on the path of human capital development, the state may not be able to harness and utilise its human and natural resources for the benefit of all.

Inuwa Yahaya said that “In the past, efforts were made more on cosmetics than on the real issues that touch on the interest of the people and for that, we missed the way”.

He also said that the country has no reason to be in the situation it currently finds itself giving the abundant human and natural resources at its disposal.

The governor added that the country’s population and natural resources ought to be an advantage and not disadvantage, adding that if properly tapped and utilised, the agricultural resources God has endowed the country with is enough to make the nation a clearinghouse for food production.

The governor then pledged that with the framework of the state, his administration will continue to strengthen the relationship with the UN so that the aim of the partnership can be achieved for the benefit of the people.

He said in comparison with other states in the North-East sub-region, Gombe State is relatively peaceful which makes it a hub for individuals fleeing crisis to seek refuge.

Inuwa Yahaya also said that in the spirit of brotherliness, the state provided spaces for IDPs to settle, noting that the action has put a strain on the state meagre resources and infrastructure.

He emphasised the need for the Gombe State Government and UN to continually work in synergy in order to address the ever-growing human challenges both in the state and the country as a whole.

He said special consideration needs to be given to the state because of its strategic position in the North East, its relative peace and the traction for people fleeing the crisis in the sub-region and elsewhere.

The governor appreciated the UN team for accepting to come to the state at a time when the world is still grappling with the COVID-19 pandemic as contained in a statement by Ismaila Uba Misilli, Senior Special Assistant, Media and Publicity to the governor.