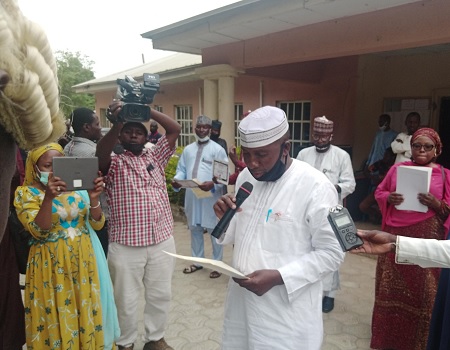 Umar Sa’idu of the State Ministry of Information and Communication has been elected the new Chairman of Bauchi State Council of the Nigerian Union of Journalists (NUJ) in an election conducted on Saturday after a total of 150 votes.

Umar Sa’id defeated his co-contestant, Bashir Idris of the Bauchi Radio Corporation (BRC), who polled 76 votes in what was described as freest and fairest council election in the history of Bauchi NUJ.

The results were announced at about by 3:30 pm by Chairman of the Electoral Committee, Malam Umar Shira, under the supervision of the National Secretariat led by the Assistant Secretary, Bamidele and the Zonal Vice President, Alhassan Yahaya.

The Electoral Committee also returned Abbas Maikano of NTA as the Vice-Chairman after polling a total of 114 votes to defeat Hashimu Bulkachuwa of the Ministry of Information and Communication who had a total of 112 votes just as Alhaji Garba Gadau of BATV was elected as Secretary after having 120 votes to defeat Kabiru Garba of BRC who had 107 votes.

The only female, Adama Ibrahim of the MOI&C was elected as Assistant Secretary after having a total of 105 votes to defeat Sani Mu’azu who had 84 votes and Bature Bala Malumbashi of NTA who had 45 votes.

For the office of the Treasurer, Abubakar Musa Waziri of FRCN Globe FM defeated his colleague, Zurkarmsini Inuwa with 162 votes to 62, Najib Sani of the Correspondent Chapel was returned unopposed as the Financial Secretary, same as Danjuma Sarki Sale (Globe fm who was returned as the Auditor.

In his post-election speech immediately after he was sworn in, Umar Sa’id promised to move the Union forward declaring that professionalism and members welfare will be the focus of the new Council. He, therefore, announced the dissolution of all committees of the Union promising to reconstitute them as soon as possible.

He also warned members to be fair and objective in the discharge of their professional functions warning that any erring member will be dealt with in line with the constitution and ethics of the NUJ.

Umar Sa’id stated that “it is not going to be business as usual, every member must sit up, do what is expected of a professional and be committed.”