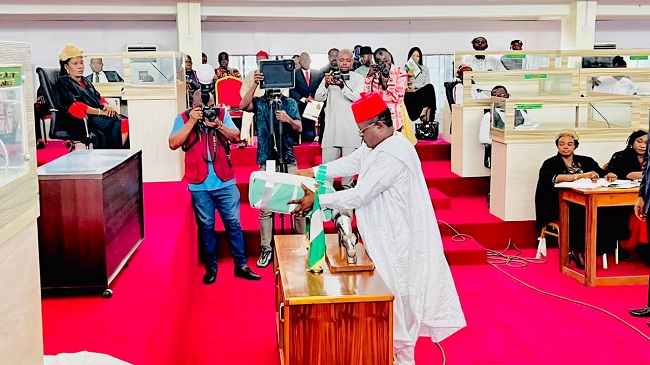 Ebonyi State governor, David Umahi, has presented a budget estimate of N145,410 billion for the 2022 fiscal year to the State House of Assembly

The appropriation bill, tagged “Budget of Latter Rain,” according to the governor, covers the Capital and Recurrent Expenditure for the financial year ending 2022.

The governor also noted that the budget contains a comprehensive financial plan that will optimize the emerging opportunities created by the administration which will reveal the hidden treasures in the state economic investment.

The Budget according to the Governor represents an increase of 46.65% over the revised approved budget of N99.157 billion.

Governor Umahi stated that the 46.65% increase of the 2022 Budget over the 2021 Revised Budget is due to the carryover of a large part of the expected receipt in 2021 fiscal to the next fiscal year.

He also added that the state expects about N4.315 billion from TETFund for the tertiary institutions adding that the Universal Basic Education Board UBEB has a growth of over N1.200Billion.

Other funds expected by the state government includes, SFTAS which stands at N16.727 billion, World Bank Covid 19 grants of N1 billion, Federal Government bridging finance of N18.225Billion given to the 36 states and the Domestic Loan of N7 billion to fund the 2022 budget deficit.

Umahi further added that the proportion of 61.73% capital to 38.27% Recurrent (ratio of 1.6 to 1) is structured bearing in mind the state determination to deepen the capital projects development especially the completion of the ongoing projects in the state.

He stated that during the 2022 fiscal year, his administration will make effort to give more employment to the people from January 2022 adding that effort would also be made to stop leakages and illegal revenue collections.

Governor Umahi stated that the dualization of the Abakaliki-Afikpo and Abakaliki-Enugu which is ongoing will achieve over 80% completion before the end of 2022.