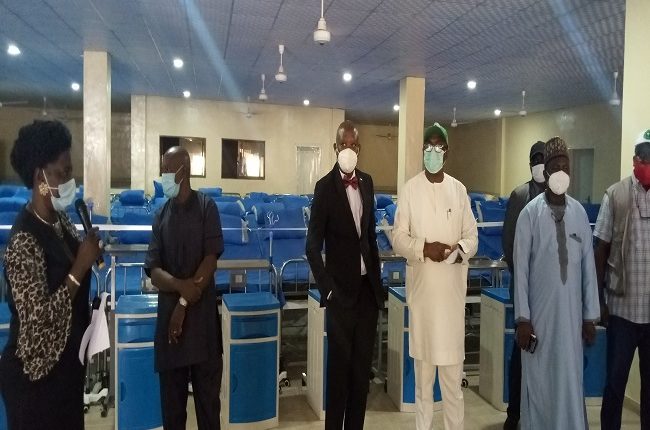 The donation by the non-governmental organization includes 100 beds and their accoutrements like mattresses, side cupboards, as well as anti-hypertensive drugs, multivitamins, among other medicaments and supplies.

Speaking during the presentation in Ilorin on Wednesday, the team lead of the foundation, Mr Chris Ezike, said that the donation was made to UITH and 20 other tertiary/medical institutions in the country to mitigate challenges of “new normal” time occasioned by COVID-19 pandemic and general health care delivery.

“This is our modest way from the nongovernmental, private sector to inject our intervention that will affect a critical area of our living, which is health. We do that in recognition and realization that health is wealth. Healthy population brings about a productive population,” he said.

Ezike, who said that the foundation had in the first phase of the distribution of medical supplies to health institutions, donated 40 feet container load of medical equipment worth $380,000 to the UITH in June, adding that it was in conjunction with Savannah Centre for Diplomacy, Democracy and Development.

Also speaking, the Kwara state Commissioner for Health, Dr Raji Razaq, appreciated the donation by the Emeka Offor Foundation to the teaching hospital, saying that the effort had indirectly supported the state government in the face of dwindling economy and envisaged recession.

“Kwara state government, in line with the vision of Governor Abdulrahman Abdulrazaq, is determined to ensure all residents have access to quality and affordable health care delivery and to reduce medical tourism to the barest minimum. This gesture today, therefore, is already in line with the vision of the governor and it is commendable”, he said.

In his speech, the Chief Medical Director (CMD) of the UITH, Dr Yussuf Dasliva, who said the donation would go a long way at touching and saving lives, especially during the Covid-19 pandemic and among general patients, thanked the foundation for the gesture.

The CMD also promised that the donation would be maximally used for intended purposes and for benefits of humanity, saying that it would not be sold.

He called on other organizations to contribute to the nation’s health sector, saying that governments could not do it all alone.