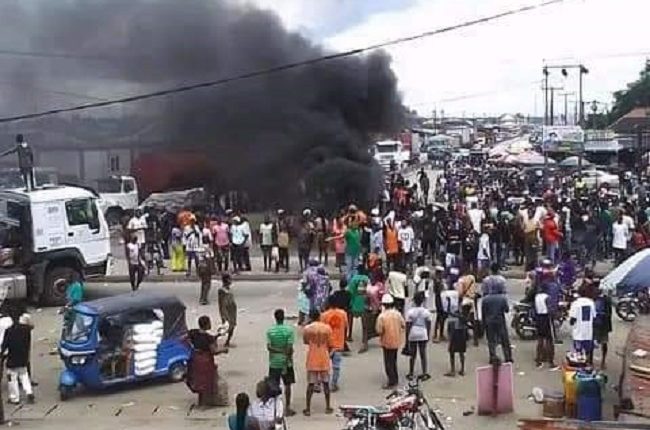 The Delta State Police Command has arrested 15 persons in connection with the protest that snowballed into mayhem at Otovwodo junction in Ughelli, on Tuesday.

Police had earlier countered the reports of three being feared dead in the mayhem, saying only one person died and two injured.

Fuel and granite-laden trucks numbering about 12 were also reportedly torched during the mayhem.

A dusk to dawn curfew has also been imposed to ward off the rampaging youths calling for a stop to an alleged indiscriminate arrest of youths suspected to be engaging in internet frauds.

Recalled that on Thursday, September 29, 2022, no fewer than 95 suspected internet fraudsters were arrested in Warri and environs in a sting operation by operatives of the Economic and Financial Crimes Commission (EFCC).

Irked by the massive arrests, youths, believed to be connected to internet frauds and sympathetic to the suspects, took over the Effurun Roundabout in Uvwie and Otovwodo junction in Ughelli chanting war songs and disrupting the free flow of traffic.

They armed themselves with placards rejecting and condemning the further arrest of their colleagues whom they claimed had not stolen from the government coffers but foreigners.

Meanwhile, the Urhobo Progress Union (UPU) Youth Wing, under the leadership of Comrade Efemena Umukoro, has condemned the ‘EFCC-must go’ protests that rocked the town on Tuesday.

A statement signed by Umukoro, said: “It has come to our attention that the #EndEFCC protest in Ughelli has taken a different tone.”

“It is sad that our people have misplaced the priority and aim behind the protest.

“Protest and civil disobedience are fundamental rights of every citizen however there exist dos and don’ts.

“We hereby condemn the destruction of properties, attack and counter-attack on Police personnel and vehicles
It is barbaric and unacceptable,” the statement added.

Umukoro further added that “We’ve also taken into consideration that some of our people are badly injured due to the incident. It’s sad that this is happening.

“We shall have an on-the-spot assessment of the whole incident and get the true pictures of it all as we shall treat all information already gathered as speculations
Till we hear from our people.”

Furthermore, the youth group called for calm and urged those aggrieved to maintain law and order,” saying “peace is priceless.”