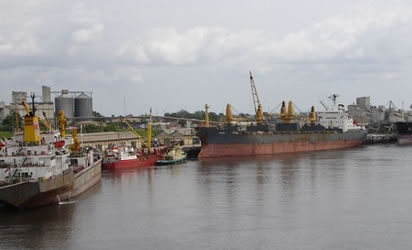 ON April 18, 2018, the Bureau of Public Enterprises (BPE), in the presence of the National Council for Privatisation (NCP), Nigerian Ports Authority (NPA), and the Infrastructure Concession Regulatory Commission (ICRC), announced the Sifax Group led consortium, Ocean and Cargo Terminal Services Limited as the winner of the bid process for the concession of the Terminal B, Warri Old Port.

However, more than two years after the concession bid process was concluded, no shipping activity has been reported at the Terminal B of the Warri Old port, findings by the Nigerian Tribune have revealed.

When the Nigerian Tribune visited the Terminal B of the Warri Old port, findings revealed that an administrative block has been put in place. Also a new empty warehouse has been constructed, standing side-by-side with a tattered and very old warehouse. Also, a few lower cadre workers including a security man were seen around the firm’s terminal carrying out some menial jobs.

A reliable source, who spoke to the Nigerian Tribune explained that since the concession of Terminal B, Warri Old Port in 2018, not a single cargo ship had berthed at the terminal.

When contacted, spokesman for Sifax Group, Mr. Muyiwa Akande, told the Nigerian Tribune that although the BPE announced Ocean and Cargo Terminal Services as the preferred winner of a tightly contested bid process in April of 2018, the facility was not handed over until February of 2019.

In the words of the Sifax Group spokesman, “The terminal was officially handed over to SIFAX Group led consortium in February 2019 by the NPA and the BPE that midwifed the concession arrangement.

“The terminal had been abandoned for over 10 years and you can imagine the state of infrastructure decay after such long abandonment.

“Since taking possession, we have been working with our partners to put it in proper shape. Construction work is going according to schedule. The warehouse is completed. The terminal building that will house the offices and Customs officials are ready. The IT infrastructure is ready.

“Some cargo handling equipment has been acquired and is on site. What is left is just the finishing touches. Very soon, operations will commence at the terminal.”

Recall that during a visit of the leadership of the House of Representatives Committee on Maritime Services last year, a representative of Ocean and Cargo Terminal Services Limited, Mr. Tunji Olusinde, assured the lawmakers that shipping activities would begin in January 2020 at the terminal.