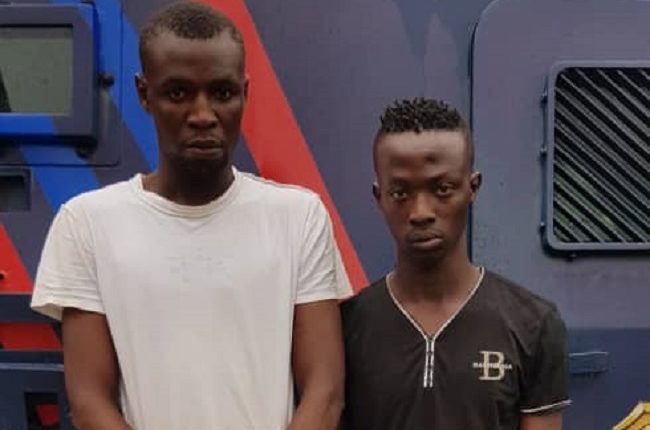 Two suspected members of a traffic robbery gang have been arrested by the operatives of the Lagos State Rapid Response Squad (RRS).

The image maker in charge of the state police command, Bala Elkana confirmed the arrest of the suspect and the hunt for other members of the gang to Tribune Online in a statement signed by him on Sunday.

Elkana said in the statement ” two robbery suspects in the habit of attacking motorists, held in traffic and collecting their belongings in some parts of Lagos were on Monday night arrested operatives of RRS on patrol in Oshodi – Oke, Lagos.”

He added that ” the suspects, Tunde Olaiya, 24 years old and Tokunbo Omotola, 26 years old, were arrested in separate encounters in Oshodi – Oke”

The police spokesperson also confirmed that ” One stolen iPhone X was recovered from Olaiya.”

According to the police ” Olaiya, an ex-convict had around 8:00 p.m. in Ojodu – Berger, Ikeja, in company of one Bolaji Nigga attacked a motorist held in traffic light and stole his iPhone X.”

“The duo while returning to Oshodi to hand – over the phone to their buyer were intercepted by Rapid Response Squad (RRS) bikers, who suspected them to be traffic robbers.”

The police PRO added that ” On search, one pass-worded iPhone X was recovered from his pocket. ”

” While his colleague escaped from the scene, Olaiya couldn’t explain where he got the phone, “the police image maker also said ”

Elkana added that ” the officers transferred him to RRS Headquarters, where he confessed to have collected the phone from a motorist in traffic.”

” Other items recovered from the suspect include powdery substance used in traffic robbery to break glasses of vehicles. ”

The victim, whose phone was retrieved from Olaiya described his experience in the hands of the criminal as traumatic.

He thanked the Police for helping him retrieve the phone and SIM card.

Tokunbo Omotola, who is equally an ex-convict was also arrested in Oshodi for traffic robbery.

He confessed in his statement to the police that apart from robbery at night, he pickpockets during the day adding that his robbery points were 7Up, Ojodu Berger; Kara Bridge, Oshodi, Mile 12 and Ojota Bridge.

Both suspected Traffic robbers confessed that once the phones are collected, they removed the SIM cards and sell them at N200 each and sell the phones separately.