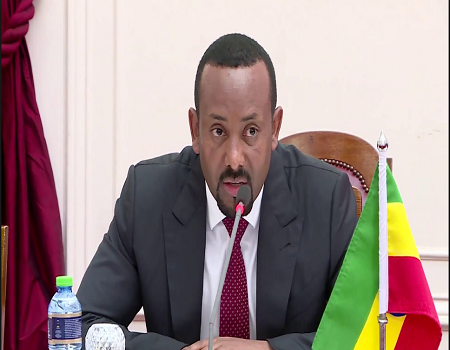 Demonstrations erupted on Wednesday after high-profile activist Jawar Mohammed, a member of the Oromo ethnic group who has been a public critic of Abiy, accused security forces of trying to orchestrate an attack against him.

Police denied reports that Jawar’s security detail was being removed to leave the popular and outspoken figure vulnerable to attack.

But his supporters took to the streets, blocking roads, burning tyres and chanting slogans denouncing Abiy, who they claim was behind the alleged threat to Jawar.

A stand-off in Addis Ababa, the capital, between security forces and hundreds of Jawar’s supporters quickly spread, with others protests centered in Oromia, one of nine regions in ethnically diverse Ethiopia.

The clashes had resulted in deaths and injuries, the state-run Ethiopian News Agency reported on Thursday.

He did not elaborate on how the deaths occurred.

Shimeles Abdisa, vice president of the Oromia region, also acknowledged some deaths in an interview with regional media Wednesday night.

“I feel very sorry for the lives that have been lost today,” he said.

“I want to express my sympathy on behalf of Oromia regional state. We could replace the property which was destroyed but sadly we can’t get back people who lost their lives.”

The unrest highlights divisions within the ethnic Oromo support base that swept Abiy to power last year – divisions that could undermine his position ahead of elections planned for May 2020.

But the two men have been at odds recently, with Jawar openly criticising some of Abiy’s reforms.