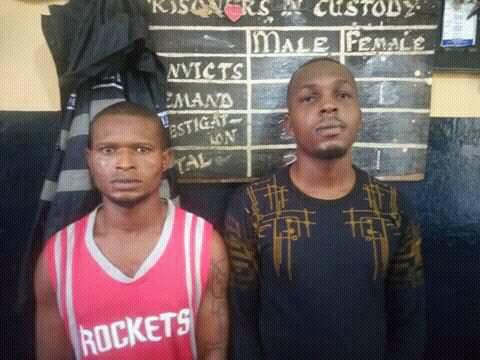 Two Nigerians who are in the habit of trafficking citizens from Nigeria to engage in cyber crimes in Ghana were on Tuesday paraded after they were arrested by the police in the country, Ghana News Agency reported on Tuesday.

According to Ghana police, Paul Okafor and Duru Favour are said to be engaged in kidnapping and trafficking of young Nigerians to perpetrate cybercrime activities in the country.

According to a statement by DSP Irene Oppong, Regional Police Public Relations Officer and Head of the AHTU in Ghana, 39 victims, all Nigerians in their twenties, were rescued in the process.

She said last Sunday, at about 11am, the Winneba District Police Command, acting on a tip-off, dispatched a police patrol team to Gomoa Pomadze, where they met a 21-year-old Nigerian, Charles Ikorohk, in the company of three Ghanaians.

She said Ikorohk told the police team that he arrived in the country from Nigeria on Wednesday, January 22, to visit a friend but could not trace him.

He said he got stranded in Accra where he met one Uzo at the Kwame Nkrumah interchange area, who later introduced him to one Arisuezo, also a Nigerian.

She said Arisuezo brought Ikorohk to Winneba and kept him in a walled house together with other young people from Nigeria.

According to DSP Oppong, Arisuezo prevented his captives from leaving the compound and subjected them to all forms of in-human treatment and also engaged them in cyber-crime activities.

She said the police after receiving a tip off on Tuesday, quickly went to the house and rescued the 39 Nigerians and arrested the suspects.

Thirty-six laptops were also retrieved from the house.

All Nigerians Should Get Tested For COVID-19  – PTF
The Presidential Task Force on COVID-19 has recommended testing of all Nigerians as a way to track the prevalence of coronavirus infection and understand how to tackle it… Read Full Story
Staff Retrenchment: NDDC IMC Snubs Senate Panel
The cold war between the Interim Management Committee (IMC) of the Niger Delta Development Commission (NDDC) and the Senate Committee on Niger Delta Affairs took a new twist on Monday as the management of the Federal government intervention agency declined appearance before the latter… Read Full Story
We’ll Rid Oyo State Of ‘One Million Boys,’ Other Nuisances ? Operation Burst DG
He said a sporadic shootout with the One Million Boys gang occurred when men of Operation Burst moved in to rescue the victim who was kidnapped by the gang and kept in an abandoned building in the area… Read Full Story
75 Groups Condemn NBMA’s Plan To Release Genetically Engineered Mosquitoes In Nigeria
Over 75 concerned civil society organisations and environment groups in Nigeria and outside have condemned the plans to introduce Genetically Modified mosquitoes into Nigeria… Read Full Story
COVID-19: Osun Govt Eases Lockdown In 4 LGAs
The Osun government has approved easing of lockdown imposed on four local government areas in the state to contain the spread of coronavirus… Read Full Story

Value of crises for any national economic system