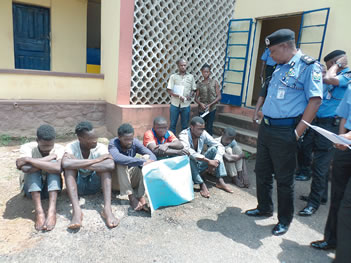 TWO staff members of Ocean Grace filling station in Ilogbo Ota, Ogun State, Olukoya Shola and Makinde Femi, who felt they could pull a fast one on their boss by leading a robbery gang to rob the company of a sum of N2.5 million, are currently wringing their fingers in regret inside the police cell in Ogun State, after they were arrested by the operatives of Special Anti-Robbery Squad.

Also arrested were Akinola Jacob, who was one of the 10-member gang who invaded the filling station, and Samson Adebowale, Adetunji Sikiru and Oridola Michael, who were said to be suspected Aye cult members who got a share from the gang’s loot.

Crime Reports learnt that Shola, a technician and Femi, an attendant, both working with the filling station, connived with some hoodlums and went to the company at midnight on June 24. Armed with gun, they destroyed the burglar proof of the room where the proceeds of the previous day’s sales were kept and went away with it.

Speaking on the arrest of the suspects at the police headquarters at Eleweran, Abeokuta, on Tuesday, July 12, the state Commissioner of Police, Abdulmajid Ali, told Crime Reports that after the report of the robbery to the Special Anti-Robbery Squad attached to the Area Command, Ota, a diligent investigation led to the arrest of six suspects connected to the crime.

In his confession to Crime Reports, one of the staff member, Shola (27) said: “I believe my planning a robbery attack on the filling station was the devil’s work. On the day we came about the idea of robbing the station while at a drink joint, it was like the devil entered the spirit of one of my friends, Sky, who suggested to one of the filling station’s attendant, Femi, that they should come and carry out robbery operation there.

“Initially, Femi opposed the idea, telling him that he would not allow such a thing in his workplace. But he succumbed eventually when Sky pleaded with him and promised that he was going to give him his share of the loot if the operation was successful.

“On the day the operation was carried out, we went to the filling station at midnight, removed two pipes from the burglar proof and went to where money was usually kept. I learnt that the money was N2.5 million and I was given N200,000. I was in the office few days after when the police came to arrest me.”

In his own confession, Femi (24) stated: “It was Sky who suggested the robbery idea. He lived along the street where the filling station is situated and used to come around to play with us. He asked whether I knew where daily proceeds were being kept and I said yes.

“He arranged his friends and we were 10 in number. When they came, they called me and I went to join them. They went in, picked the money and gave me N200,000. I continued to go to work but when investigation started, I became afraid and kept off work for about four days. I went back the fifth day and I was arrested.

“Three members of Aye Confraternity, Samson, Sikiru and Michael, started threatening to expose me if I did not give them their share, after they got to know that I was involved in the robbery, so I gave them N20,000. I spent N60,000 and kept the remaining N120,000 before my arrest.”

Another gang member, Jacob (24), also said that “it was Sky who called me for the operation and I was given N150,000 as my share. I intended to travel to Libya with the money. Others who participated in the robbery were Sky, Dollar, Mayowa, Pata Nla, Seyi, Fatai, Femi and Shola. We had a gun which was brought by Sky. I don’t know where he got it from. This is my first time of getting involved in crime and I agreed with the plan because I grew up with most of them in Ilogbo neighbourhood.”

We in the South-West need security urgently

We must trust God at all times —Pastor Omole