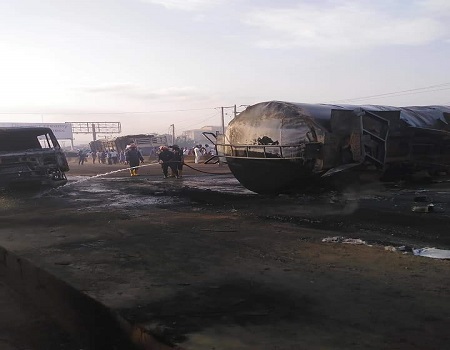 Two people and no fewer than 17 vehicles were burnt to ashes when a tanker conveying petroleum product caught fire at Bible College Bus Stop, along the Lagos-Abeokuta expressway, late Thursday night.

The incident, according to the Federal Road Safety Corps (FRSC) left six others injured.

TribuneOnline gathered that the accident happened at about 11.55 p.m when the tanker fell and spilt its content on the highway.

The tanker was reported to have caught fire and burnt a tanker trailer, 10 articulated vehicles, three commercial buses and three cars.

The FRSC said the content of the tanker spread from Shoprite mall down to the FRSC office at the Lagos-Abeokuta toll gate.

Oladele said the agreement amongst others  require trucks conveying dangerous goods, including  petroleum products to be installed with tanker’s seal valve, which prevents the liquified contents from spilling its contents  in the event of a road traffic  crash

46 dead, 387 injured in accidents on Abeokuta-Lagos expressway in 6 years ― FRSC