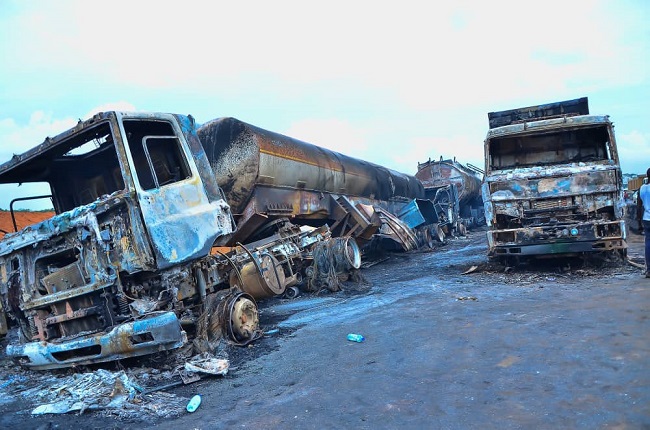 The FRSC sector commander in Ogun State, Ahmed Umar, told the News Agency of Nigeria (NAN) that the tanker explosion occurred at about 6.20 a.m. on Tuesday.

NAN reported that the explosion occurred in front of Romona trailer park on the expressway. “The fire is serious; six tankers, five trucks and two cars were burnt in the explosion,” Umar said.

At the time, he explained that one person had so far been rescued and taken to a private hospital in Ogere, just as he added that the deceased had been taken away by their relatives for burial.

Meanwhile, the Ogun State Traffic Compliance and Enforcement Corps (TRACE) has advised motorists plying the road to use alternative routes. TRACE spokesman, Babatunde Akinbiyi, explained that the tanker which was laden with fuel suddenly burst into flames which then affected other vehicles.

“Vehicles moving inbound Lagos should go through Saapade-Ode-Remo-Iperu-Sagamu to relink the Lagos-Ibadan Expressway.

NAN reported that the incident was the fifth of such tragedies involving fuel tankers on the Lagos and Ogun axis since the beginning of the year.

A similar fuel tanker-related fire was recorded on January 7 on the Apapa/ Oshodi Expressway.

On March 21, a fuel tanker was the cause of fire on Otedola Bridge, also on the Lagos-Ibadan Expressway, in which many vehicles were burnt.

On March 25, a diesel-laden tanker went up in flames at Ikotun area of Lagos, leading to the incineration of other vehicles and shops.

On June 17, fire from the kitchen of a Chinese restaurant at the Ogun State Property Investments Corporation (OPIC) Plaza in Lagos trailed a leaking gas truck that was on motion in the area.

This resulted in a fire snowball that engulfed several other vehicles and property. Twenty-five cars were destroyed in the OPIC Plaza inferno, while 13 persons, mostly workers in the restaurant, sustained burn injuries