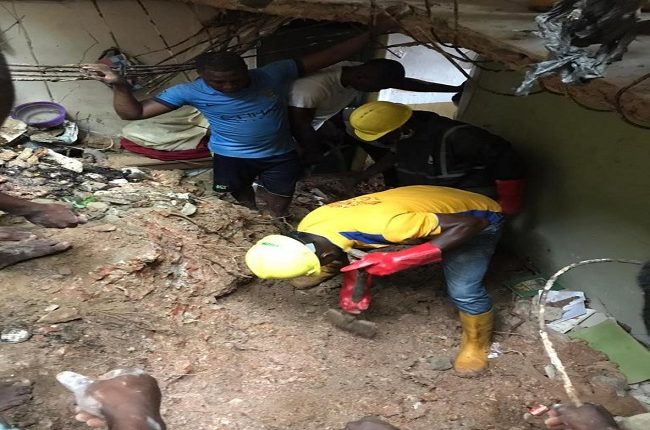 The Lagos State Emergency Management Agency (LASEMA) has confirmed that two children were trapped and died in a collapsed building situated at 46, Gafari Balogun St., Ogudu in Lagos State, after Wednesday heavy downpour.

Its Director-General, Dr Olufemi Oke-Osanyintolu, told the News of Nigeria (NAN) in Lagos that the LASEMA Response Team (LRT), said that his team brought out the remains of the victims within two hours of operations.

Oke-Osanyintolu said that the LRT received a distress call at 12.40 p.m of a collapsed building at the aforementioned location.

“On arrival at the scene by agency responders, it was observed that a building collapsed as a result of a mudslide at the rear of the building caused by heavy rainfall.

“ We were informed that two children, one male and one female, were trapped and immediately commenced a search and rescue operation.

“Unfortunately, they were found dead and their remains were transported to the mortuary,” Oke-Osanyintolu said.

He said that integrity test would be conducted on the remainder of the building which had now been cordoned off by the Lagos State Building Control Agency (LASBCA).

US Government Declares Six Nigerians Wanted Over Internet-Related Crimes
The US government, on Tuesday, declared wanted six Nigerians who are currently on the run after they were indicted and charged for internet-related crimes. According to the US Department of Justice, the six Nigerians were indicted by both the Federal Bureau of Investigation (FBI) and the US Attorney’s Office in… Read Full Story

Edo 2020: Shape Of Things To Come
It is increasingly becoming well-defined some key factors that are bound to shape the 2020 governorship election in Edo State. With the main combatants not ready to yield ground on their individual and class interests, ongoing alliances and realignments of forces come in another scene in the script being acted by the… Read Full Story