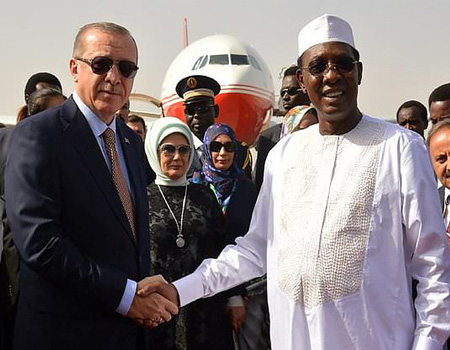 Turkish President Recep Tayyip Erdogan arrived in Chad on Tuesday, his first visit to what is one of the poorest and most corrupt countries in the world, national media reported.

Erdogan landed at the airport in the capital N’Djamena, whereupon descending the aircraft’s steps he was met by his counterpart Idriss Deby.

The trip “opens a new page in the deepening of relations between the two countries”, the Chadian presidency said.

Erdogan is heading a delegation of a dozen ministers, including defence and foreign affairs, as well as 100 Turkish businessmen.

The trip is part of the Turkish president’s three-country African tour and follows a visit to Sudan on Sunday, where he signed military and economic deals, aimed at boosting two-way trade from the current level of $500 million a year to $1-billion.

Nwoye breaks silence on his loss to Gov Obiano