Turkey claims more than 75,000 migrants have entered the EU 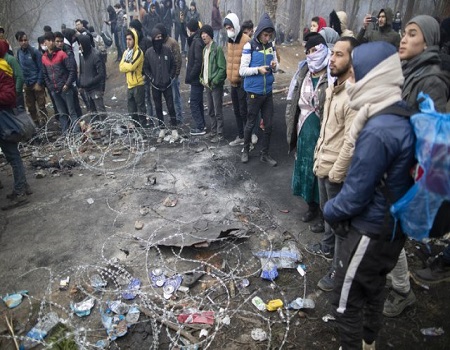 Turkey has claimed it has let more than 75,000 migrants cross its border towards the European Union.

By Sunday morning at around 10 am (0700 GMT), 76,358 migrants had crossed the border via the province of Edirne, Turkish Interior Minister Suleyman Soylu wrote on Sunday on Twitter.

In the province of Edirne, there are border crossings to EU members Greece and Bulgaria. However, initially neither Sofia nor Athens had reported the arrival of such large numbers of migrants.

The Bulgarian government said on Sunday that not a single migrant had crossed the border illegally. “At this point, the situation is calm,” according to Bulgarian Defence Minister Krasimir Karakachanov.

Bulgaria already strengthened its 259-kilometre-long land border with Turkey on Friday with members of the gendarmerie.

Karakachanov also confirmed that Bulgarian Prime Minister Boyko Borisov would meet Turkish President Recep Tayyip Erdogan on Monday to discuss the situation in Syria and the migration problem. The minister did not say exactly where the meeting should take place.

According to Athens government sources, Greek police and military have prevented around 10,000 migrants from crossing the border river Evros. The country has also strengthened its units on the border.

Greek Defence Minister Nikos Panagiotopoulos accused Turkey of organizing the influx of migrants on the shared border after a tour of the area where Greek troops are posted. “We will continue to strengthen the troops,” he said, according to Greek television.

According to the Greek government, patrols in the straits between the Greek islands and the Turkish Aegean coast have also been strengthened.

As the stormy winds of the past few days have subsided, the government in Athens now fears a new influx of migrants, this time across the Aegean.

Local reporters said that more boats with migrants were en route from the Turkish Aegean coast to Lesbos.

The Turkish coastguard is watching these boats without stopping them from crossing to Lesbos, the Athens TV channel Mega reported.

According to the UN Organization for Migration (IOM), more than 13,000 people are on the Turkish side of the border.

They hope to enter the EU after Turkey has made it clear that it is no longer stopping migrants from crossing the border.

According to the latest UN figures, Turkey has taken in around 3.6 million refugees from Syria, plus migrants from Afghanistan and Iraq.

Schinas, who is set to be in Berlin on Monday, said that he has reached out to Croatia, which holds the rotating EU presidency, “to request that EU Home Affairs Ministers meet urgently.”

Under a March 2016 deal with the EU, Turkey agreed to prevent migrants from crossing into neighbouring EU member states Greece and Bulgaria. In return, Brussels offered funding to support refugees inside the country, among other things.

The agreement also provides that the EU can send back all refugees and migrants who illegally enter the bloc from Turkey.

The EU had made it clear on Friday that it expected Turkey to comply with the agreement.