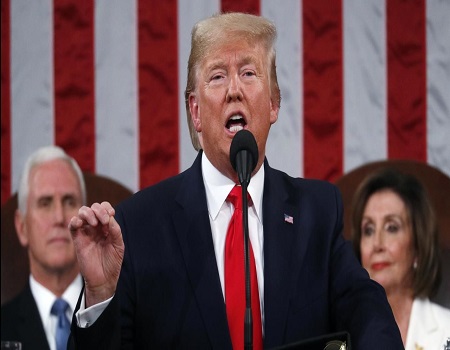 US President Donald Trump claimed credit for a “great American comeback” during the annual State of the Union address before a rancorous and divided Congress on Tuesday, focusing on the economy ahead of a re-election campaign this year.

Trump did not mention the ongoing impeachment trial during his 78-minute speech, which came the night before the Senate was to vote on the verdict. He is expected to be acquitted by the Republican majority.

The opposition Democrats were visibly and audibly upset by what they viewed as the highly partisan language in the president’s speech, in which he took shots at immigration, called for restricting abortions and pledged to fully protect gun rights.

As the president finished, Speaker of the House Nancy Pelosi ripped up her copy of the address in what became the clearest reaction by the Democrats.

“We are moving forward at a pace that was unimaginable just a short time ago and we are never going back,” Trump said to repeated applause from Republican lawmakers, as he opened his address with an economic focus. “The years of economic decay are over.”

Trump repeatedly contrasted himself with former Democratic President Barack Obama, at one point slamming what he called the “failed economic policies of the previous administration”.

Fact-checkers at major US media outlets were quick to point out that the economic expansion ongoing in the US began under Obama, and has shown signs of slowing in recent months. Trump has not been able to sustain 3 per cent economic growth, which he had promised.

Republicans chanted “four more years” as the president entered the House chamber, the same room where Democratic lawmakers voted in December to impeach him.

When asked why she ripped up the speech, Pelosi commented: “It was the courteous thing to do considering the alternatives.” She called it “a manifesto of mistruths.” Her act was pounced on by conservatives who called it childish.

The president’s speech was full of flourishes that are likely to play well with his base of conservative supporters.

During the address, the president awarded the Medal of Freedom to an influential conservative radio host, with a history of racist outbursts.

He also initiated a surprise reunion of a soldier and his family and introduced Venezuelan opposition leader Juan Guaido as a bastion against socialism.

“Socialism destroys nations, but always remember freedom unifies the soul,” Trump said. He also hailed the increased spending on the military but made no mention of the ever-growing national debt, set to hit levels not seen since World War II.

The president’s speech is something of a preview of his re-election campaign, just nine months before the country heads to the polls in November.

Trump was impeached over his handling of Ukraine. Democrats say he pressured Kiev into helping him dig up dirt on his rivals ahead of polling by leveraging military aid, and warned he may again try to abuse his power to influence the elections.

The president insists he did nothing wrong. Even some members of his own Republican Party have conceded he acted improperly, but say they will vote to acquit, arguing the offence does not rise to the level of impeachment.

Trump has made renewing the space programme a cornerstone of his presidency, vowing in his State of the Union address that the US will fulfil its “manifest destiny in the stars” and be “the first nation to plant its flag on Mars.”

More on brand, though, was his attacks on “illegal immigrants,” depicting in lurid detail violent crimes committed by migrants and voicing support for legislation to sue left-leaning localities that have laws protecting undocumented people.

Stricter immigration rules have become a controversial policy point, particularly after a debacle of separating and jailing families, and bans on citizens of several Muslim majority countries.

In the official Democratic rebuttal to the address, Michigan Governor Gretchen Whitmer said Trump’s boasting on the economy rings hollow for the working class, warning he would erode health care protections.

“What matters is that millions of people struggle to get by or don’t have enough money at the end of the month after paying for transportation, student loans, or prescription drugs,” she said.

She closed her brief response with a clear mention of impeachment saying: “The truth matters, facts matter and no one should be above the law.”