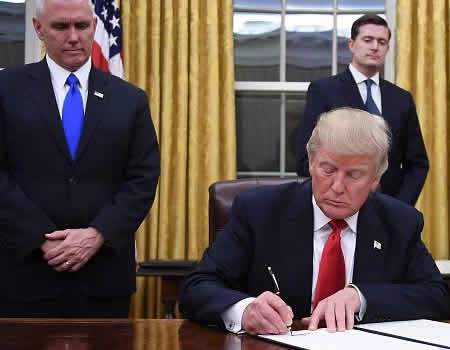 UNITED States President Donald Trump says he has signed a $1.3 trillion spending bill into law Friday despite threats to veto the measure due to its lack of protections for undocumented immigrants who arrived in the US as children and because it does not fully fund his proposed border wall.

“I will never sign a bill like this again,” Trump said. He did sign the bill, which prevented a Friday midnight federal government shutdown. “Nobody read it. Its only hours old,” the president said of the nearly 2,200-page bill released Wednesday night.

In a hastily arranged White House media briefing, the Republican president blamed Democrats for the lack of protections for immigrants arrived under the Deferred Action for Childhood Arrivals program.

“We want to include DACA in this bill. The Democrats would not do it,” the president said.

Trump called on Congress to give him a “line-item veto for all government spending bills” in the future.

The measure, which funds the federal government through September 30, was passed by Senate early Friday morning after the House of Representatives approved the measure on Thursday. Lawmakers had just hours to read the nearly 2,200-page bill released Wednesday night, VOA reported.

With midterm elections looming in November, the bill was likely the final time Capitol Hill considers major legislation this year. The law fulfils Trump’s vow to boost military funding but provides funding for limited parts of his immigration agenda. The law includes a 2.4 per cent pay raise for military personnel.

After extensive negotiations between Republicans and Democrats, the law also provides $1.6 billion for physical barriers and 150 kilometres of a wall at the US-Mexico border, short of the $25 billion Trump requested for the project he repeatedly touted on the campaign trail while pledging Mexico would pick up the cost.

“Got $1.6 Billion to start Wall on Southern Border, rest will be forthcoming. Most importantly, got $700 Billion to rebuild our Military, $716 Billion next year…most ever. Had to waste money on Dem giveaways in order to take care of military pay increase and new equipment,” Trump said on Twitter.

House Minority Leader Nancy Pelosi touted the agreement in a letter to her Democratic colleagues, saying negotiators “fought for and achieved drastic reductions to the Trump/GOP plan,” including much less funding for the wall than Trump requested and a limit on the number of immigrants that can be detained by Immigration and Customs Enforcement.

Senate Democratic Leader Chuck Schumer said there was “plenty” of compromise in the spending package and that members of his party “feel very good.”

“So many of our priorities for the middle class are included,” Schumer tweeted. “From opioid funding to rural broadband, from student loans to child care, this bill puts workers & families first.”

Despite Democrats’ efforts, the law makes no mention of protection for so-called Dreamers, undocumented immigrants brought to the United States as children. They were protected from deportation under the Deferred Action for Childhood Arrivals (DACA) program that began in 2012. Trump, however, rescinded the program late last year while giving Congress six months to come up with a permanent plan for the immigrants.

Democrats had called on Republican leadership to bring to a vote on the House floor a range of proposals that would fix DACA. Federal judges have meanwhile ordered the Trump administration to keep in place certain parts of DACA while legal challenges continue.

Republicans hold majorities in both the House and Senate, but there was not universal support in the party for the bill.

Both parties touted the $4.6 billion in total funding to fight the nation’s opioid addiction epidemic and a record $3 billion increase for medical research at the National Institutes of Health.

Speaker Ryan said the measure tackles a number of critical programs, including boosting defence spending and funding for the Veterans Administration, as well as opioid treatment and drug enforcement and improvements for roads, railways and airports.

“This doesn’t restrict gun rights in any way, shape or form,” Republican Rep. Tom Cole told reporters shortly before the vote. “The FIX NICS was very bipartisan and we all recognise there are gaps in the background system.”

It also includes money to improve school safety, including money for training school officials and law enforcement officers on how to identify signs of potential violence and intervene early, installing metal detectors and other steps to “harden” schools to prevent violence.