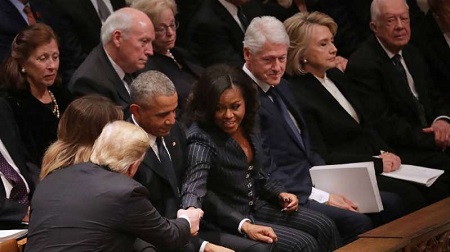 President Trump on Tuesday met with his predecessors for the first time since taking office at the state funeral of former President George HW Bush.

Trump and first lady Melania Trump entered the Washington National Cathedral, walking down the center aisle and to their seats in the front row next to former President Barack Obama and former first lady Michelle Obama. Both Trumps shook hands with each of the Obamas.

The handshake was believed to be the first interaction between President Trump and former President Obama since Inauguration Day on January 20, 2017.

The Trumps did not extend their hands to former President Bill Clinton and former first lady Hillary Clinton, who was seated next to the Obamas, nor did the Clintons.

The Trumps also did not greet former President Jimmy Carter of former first lady Rosalyn Carter, who was sitting further down the aisle.

Melania Trump appeared to acknowledge Hillary Clinton, who lost a contentious presidential election to Trump in 2016, with a nod.

All of the leaders and their wives then sat expressionless, making for a somewhat awkward moment between the former presidents ahead of the Bush funeral.

President Trump has had an acrimonious relationship with his predecessors, whom he has often criticized in the two years since taking office.

Former President Obama has responded in kind, campaigning against President Trump and the Republican Party in the 2018 midterm elections.

Michelle Obama wrote in her book “Becoming” that she will “never forgive” President Trump for spreading the false rumor that her husband was born in Kenya and thus ineligible to serve as president.

But the moment was also remarkable in that it brought together five former presidents, despite the acrimony.

The Bush family, who has also come under fire from President Trump, invited him to the funeral in a show of national unity.

Former President George W Bush, who has spoken with President Trump since he entered the Oval Office, will eulogize his father at Wednesday’s service.