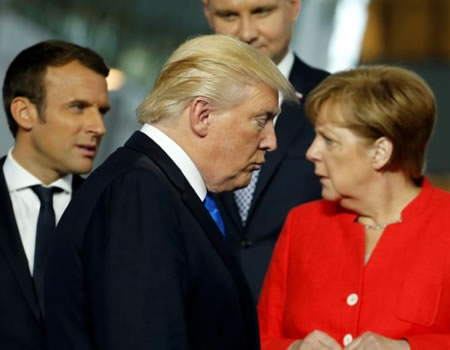 For German Chancellor Angela Merkel, who often pulls her rhetorical punches, her weekend message signaling a shift in the post-war order was uncharacteristically blunt.

But growing frustration with US President Donald Trump, a determination to reform Europe with France’s incoming leader and political considerations closer to home convinced Merkel to take a stand, senior German and European officials said.

Speaking in a packed beer tent in Munich on Sunday, after a Group of Seven summit in Sicily and a NATO meeting in Brussels – both dominated by tensions with Trump – Merkel spoke with surprising frankness.

“The times when we could fully count on others are over to a certain extent. I have experienced this in the last few days,” Merkel said.

“But we must know that we need to fight for our future ourselves, as Europeans, for our destiny.”

The fact that Merkel reiterated many of her points on Monday showed it was no accident.

Below are some of the factors which may have prompted Merkel to make her remarks. They are based on conversations with German and European officials, who declined to be named.

Merkel’s conservatives have built up a comfortable double-digit lead over their main rivals, the Social Democrats (SPD), in opinion polls ahead of a German election on Sept. 24.

But there are increasing signs that her opponents could be tempted to run an anti-Trump campaign that paints Merkel as being too soft on the president.

The SPD have made clear they will resist pressure from Trump for Germany to ramp up defense spending, another issue that resonates well with German voters. Merkel has supported higher spending despite the political risks.

By making clear that Germany may have to distance itself from Trump, she is protecting her domestic flank and reframing the defense spending issue: no longer is it about fulfilling Trump’s wishes, but about building a European defense capacity independent of the United States.

Merkel hosts a G20 summit in Hamburg in early July. Until now, her approach has been to try to shepherd the Trump administration towards a consensus on major issues like free trade, climate change and migration.

But the G7 summit showed that this strategy may not work.

By shifting rhetoric now, she is effectively acknowledging that she can’t guarantee a positive outcome in Hamburg, and by singling out America, reduces the risk of being blamed for a G20 failure two months before the German vote.

Merkel would not have made her remarks before Emmanuel Macron’s victory in the French election earlier this month, German officials said.

A like-minded pro-European and multilateralist, Macron gives Merkel a reliable partner with whom she can move forward in Europe on issues like defense and security cooperation, migration and euro zone reform.

German officials described the dynamic between the two at the G7 summit as excellent.

Merkel is also signaling to conservatives in her party who are deeply skeptical about some of Macron’s bolder ideas for the euro zone that they must be prepared to compromise.

“She is using the Trump moment to articulate a more pro-European policy,” one German official said. “She is testing the waters for a more forthcoming policy towards France.”

Her message was also directed at Britain. Berlin fears the British government still has unrealistic expectations about Brexit.

Merkel’s message in Munich was the product of rising frustration with Trump, whose first visit to Europe was deeply disturbing to the Germans, according to several officials.

The frustrations began in Brussels when Trump renewed his attack on Germany’s trade surplus and car exports in a private meeting with EU officials.

They grew at NATO when Trump repeated statements about members of the alliance owing vast amounts of money. His failure to voice clear support for NATO’s mutual defense doctrine, Article 5, and to evoke Russia as NATO’s prime threat also irked Berlin and other allies.

At the G7 summit, the six other nations were at odds with Trump on climate change and migration. Beyond policy issues, his shoving of the Montenegrin prime minister and macho handshakes with Macron deepened the scepticism.

“Trump may have listened, but what the trip showed is that he may not be capable of learning,” a second German official said.

Merkel described the climate discussion in Sicily as “very dissatisfying”.

Trump’s refusal to give allies any indication of whether he would stay in the Paris climate agreement left a bad taste.

As he left Sicily, he sent a tweet saying he would make a decision on the Paris accord this week.

Merkel’s speech in Munich could be seen as a reminder to Trump that the decision will have real implications for his relationship with Berlin and other partners, officials said.