Trump, Democrats in battle of wits over impeachment saga

Foreign Affairs
By By Adekunle Sulaimon On Dec 20, 2019 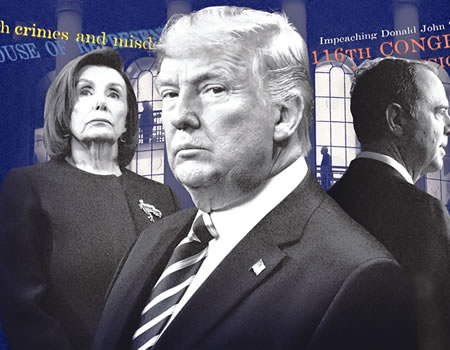 Embattled United States President Donald Trump, on Thursday, engaged in a battle of wits with Democrats, as the Senate awaits the report of his impeachment on Wednesday by the House of Representatives.

While Trump hopes for a “robust trial” with testimony from innumerable witnesses, including former Vice President Joe Biden, the Democrats think they can find common ground with their Republican counterparts in the Senate on a “phase one” of the expected trial.

The impeachment triggered a flurry of activities with the president and the forces behind his travails weighing the possible options that can be capitalised on under the configuration in the Senate.

The intrigues also included the vested parties giving various interpretations to the constitutional provisions on impeachment.  The aftermath of the impeachment by the House of Reps, the articles of impeachment are now expected to be sent to the Senate, where senators will consider evidence, hear witnesses and vote to acquit or convict the president. The chief justice of the US Supreme Court will preside over the trial.

Trump was impeached for obstruction of Congress and abuse of power over his dealings with Ukraine by the Democrats-dominated House of Reps led by speaker Nancy Pelosi.

The landmark votes on Wednesday set up a likely January trial in the Republican-dominated Senate, where Trump is expected to be acquitted owing to the belief that his party member will not compromise.

ALSO READ: ‘Do nothing Democrats, I did nothing wrong’, Trump cries out in impeachment saga

A two-thirds majority vote is required in the 100-member Senate to convict and remove a president from office. An impeachment appears unlikely in the case of Trump because the Senate is made up of 53 Republicans, 45 Democrats and two independents who caucus with the Democrats. At least 20 Republicans would have to vote with all Democrats and the two independents, will have to follow suit to remove the president from office.

Senate Majority Leader Mitch McConnell has indicated that he would like swift proceedings, but the president has said he would not mind a robust trial, with testimony from innumerable witnesses, including Biden and the whistle-blower whose complaint led to the impeachment inquiry.

According to Reuters, on Tuesday, McConnell appeared to reject the Democrats’ request for new witnesses in the trial, saying the Senate would not “do House Democrats’ homework for them” or go on a “fishing expedition” after the House impeachment process.

McConnell said he hopes to meet Schumer soon to determine the next steps. He added that he is “optimistic” that Republicans and Democrats can agree on a “phase one” of the trial, which would include the presentation of the case and defence.

But following Wednesday’s impeachment votes, Pelosi said she would wait, for now, to send the articles of impeachment to the Senate.

US media have reported that some House Democrats are urging Pelosi to withhold the transmittal of the articles until the “appropriate time”.

Pelosi on Wednesday evaded questions about when she plans to send the articles to the Senate.

“It would have been our intention” to send the articles to the Senate, but “we’ll see what happens over there,” Pelosi told reporters.

“We cannot name managers until we see what the process is on the Senate side,” Pelosi said, referring to members who will serve as House prosecutors in a Senate trial. “So far we have not seen anything that looks fair to us.”

Withholding the articles of impeachment may give the Democrats leverage when it comes to setting the procedures for the trial.

Pelosi said Democrats will make a decision on next steps as “a group”.

McConnell blasted the Democrats though for not immediately sending the articles to the Senate.

He accused Pelosi of being afraid to send “their shoddy work product to the Senate.

ALSO READ: Trump poised to become third US president to be impeached

“The framers built the Senate to provide stability, to keep partisan passions from boiling over,” he said from the Senate floor. “Moments like this are why the United States Senate exists.”

There’s no constitutional requirement that the House immediately send the articles of impeachment to the Senate.

Between Pelosi and Trump

According to Independent, on 18 October 2008, Donald Trump commented that the House Speaker Nancy Pelosi should have pushed to remove former president George W Bush from office for getting the US into a “horrible war” with Iraq, a resurfaced interview shows.

Trump said this during an interview with Wolf Blitzer resurfaced after the CNN host posted a clip to Twitter, 11 years later.

In the interview, Mr Trump said he’s “very impressed” by Ms Pelosi — who he has since called “crazy” and “nervous Nancy” — but he was surprised that “she didn’t do more” to check the former president after revelations that Iraq did not possess so-called weapons of mass destruction and after intelligence officials found no credible links between Iraq and Al-Qaeda.

President Bush “got us into the war with lies” and compared the Bush administration’s rationale for invading Iraq with the impeachment hearings for former President Bill Clinton, which Mr Trump called “nonsense”.

He said: “Look at the trouble Bill Clinton got into with something that was totally unimportant, and they tried to impeach him, which was nonsense. Yet Bush got us into this horrible war with lies, by lying, saying they had weapons of mass destruction, by saying all sorts of things that turned out not to be true.”

In 1998, Mr Clinton became the second president to be impeached after allegations he lied under oath and obstructed justice; he was acquitted in the Senate.

On the eve of the impeachment vote, Trump sent Ms Pelosi a rambling, six-page letter accusing her of instigating an “illegal coup”, breaking her “allegiance to the Constitution” and “declaring open war on American Democracy”.

Pelosi told CNN that the letter is “really sick”.

She said: “I don’t have a reaction. It’s ridiculous.

Meanwhile, Trump has tweeted that Pelosi feels her phoney impeachment HOAX is so pathetic, she is afraid to present it to the Senate, which can set a date and put this whole SCAM into default if they refuse to show up! The Do Nothings are so bad for our Country!

He added through graphical representation on twitter that “they (Democrats) are not really after me, but are after you (Americans), I’m just in the way,” he tweeted.

No date for a Senate trial has been set, but McConnell has said it will be the chamber’s “first order of business” upon returning to Washington, DC, in the New Year.

Senate Democrats have proposed a trial plan that would see proceedings begin on January 6. Presentations by House managers, who would effectively work as prosecutors, would begin on January 9 under this plan. It is unlikely that Senate Republicans would agree to the Democrats’ exact proposal.

According to the US Constitution, abuse of power is not specifically referred to as an impeachable offence in, which states that a president can be removed from office for “treason, bribery, or other high crimes and misdemeanours.”

Specifically, in the impeachment context, the abuse of power is generally defined as using the vast powers of the presidency for personal benefit.

But, the founders of the United States intended the phrase” other high Crimes and Misdemeanours” to broadly encompass abuses of power, legal scholars said to Reuters.

Alexander Hamilton, a famed American statesman, wrote in 1788 that impeachment proceedings were for “those offences which proceed from the misconduct of public men, or, in other words, from the abuse or violation of some public trust.”

Louis Michael Seidman, a professor at Georgetown Law, said the core allegation against Trump – that he withheld security aid to Ukraine to pressure it to announce investigations that would benefit him politically – was the sort of conduct the founders considered impeachable.

ALSO READ: Hillary Clinton ‘under enormous pressure’ to run in 2020

Abuse of power was one of the articles of impeachment advanced against President Richard Nixon, who resigned before a full House vote on the charges. In approving the charge of the allegation against Nixon, a House committee accused of him of authorising tax audits of political opponents on his “enemies list.”

Abuse of power was advanced as an article of impeachment against then-President Bill Clinton relating to his affair with a White House intern, but a majority of House members voted against including that charge. Clinton was eventually impeached on two other charges – perjury and obstruction of justice – but was not convicted by the Senate.

The second charge being the obstruction of the congress was upon the belief of the Democrats that Trump obstructed Congress based on his stonewalling of the House’s impeachment inquiry. The House argued that the White House has refused to provide documents to congressional investigators and has instructed top advisers and government officials to defy subpoenas and refuse to testify.

A similar charge, contempt of Congress, was one of the articles of impeachment against Nixon, who had defied subpoenas for incriminating tape recordings.

Contempt of Congress is a misdemeanour crime under US law, which defines the offense as wilfully failing to provide testimony or documents to Congress. A different crime, obstruction of justice, more broadly prohibits “interference with the orderly administration of law and justice.”

The White House has argued that the Constitution does not require senior presidential advisers to appear for compelled testimony before Congress. A judge rejected that argument on November 25 in a dispute over a subpoena issued to former White House counsel Don McMahon.

Trump’s lawyers have also argued his refusal to cooperate with the impeachment investigation is justified because the process has been unfair to him.

Recall that all of these charges were brought upon following a whistle-blower complaint, which was centred on a July 25 phone call during which Trump asked Ukrainian President VolodymyrZelenskyy to open an investigation into Biden and his son, Hunter, who had served on the board of a Ukrainian gas company. Although, reports confirmed that there has been no evidence of wrongdoing by the Bidens.

Trump also wanted Zelenskyy to investigate a debunked conspiracy theory that Ukraine, not Russia, interfered in the 2016 US presidential election.

According to AFP, at the time of the call, the Trump administration was withholding nearly $400m in Congress-approved military assistance from Ukraine.

Citing testimony by current and former US officials, Democrats also accuse Trump of leveraging a White House meeting that Zelenskyy wanted in exchange for the investigations.

Trump mocks Portland mayor who was gassed by federal troops