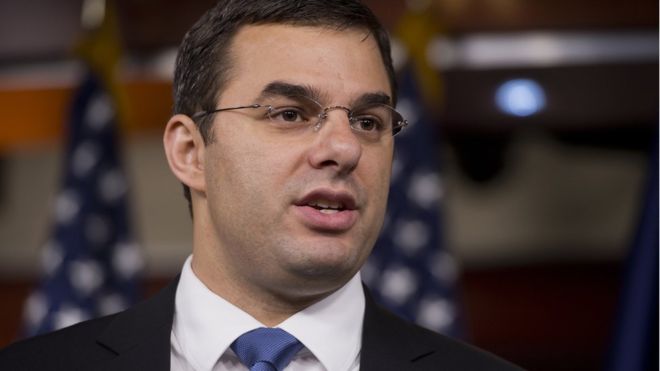 Rep. Justin Amash, the only congressional Republican who publicly argues that President Donald Trump has engaged in impeachable conduct, announced Thursday he is quitting the GOP.

“Today, I am declaring my independence and leaving the Republican Party,” Amash wrote in a Washington Post op-ed Thursday morning. “No matter your circumstance, I’m asking you to join me in rejecting the partisan loyalties and rhetoric that divide and dehumanize us. I’m asking you to believe that we can do better than this two-party system — and to work toward it. If we continue to take America for granted, we will lose it.”

Amash didn’t mention the President by name, but his decision to abandon the party comes after months of escalating criticism not just of the President but of his own colleagues for their failure to hold Trump to account, specifically for the actions detailed in special counsel Robert Mueller’s report on the 2016 election and its aftermath.

Trump appeared to celebrate Amash’s departure on Twitter, slamming him as a party defector who would not have been re-elected.

ALSO READ: FG, WHO partner to enhance value for money in healthcare delivery(Opens in a new browser tab)

“Great news for the Republican Party as one of the dumbest & most disloyal men in Congress is ‘quitting’ the Party,” the president tweeted. “No Collusion, No Obstruction! Knew he couldn’t get the nomination to run again in the Great State of Michigan. Already being challenged for his seat. A total loser!”

In May, the five-term Michigan representative became the first sitting Republican lawmaker to join Democratic calls for an impeachment inquiry. He drew scorn from GOP leaders and Trump — Amash has “been a loser for a long time,” the President responded — when he wrote in a series of tweets that, after reading Mueller’s report on Russian interference in the 2016 election, he believed Attorney General William Barr intentionally misrepresented Mueller’s findings and Trump engaged in obstruction of justice.

Amash, a staunch libertarian, litigated the failures of the Republican Party, Congress and the American political system as a whole in his Post op-ed.

“The Republican Party, I believed, stood for limited government, economic freedom and individual liberty — principles that had made the American Dream possible for my family,” he wrote.

“In recent years, though, I’ve become disenchanted with party politics and frightened by what I see from it. The two-party system has evolved into an existential threat to American principles and institutions.”

He also pointed to George Washington’s farewell address, in which the first US President warned Americans of the dangers of partisanship.

“True to Washington’s fears, Americans have allowed government officials, under assertions of expediency and party unity, to ignore the most basic tenets of our constitutional order: separation of powers, federalism and the rule of law,” Amash said. “The result has been the consolidation of political power and the near disintegration of representative democracy.”

Amash’s break with his party adds fuel to growing speculation that he will seek the Libertarian Party nomination and launch a long-shot bid for president in 2020. The op-ed comes as Trump is embarking on his 2020 reelection campaign and it solidifies Amash’s role as a leading anti-Trump conservative, representing a group that in 2016 coalesced under a loose “Never Trump” banner.

Over the past several months, Amash has repeatedly refused to rule out a potential presidential bid. Such a campaign would reshape the presidential election: Amash has a national following among Libertarians, and he could draw support from younger, conservative voters who are uncomfortable with Trump.
He told CNN in March that he never stops thinking about such possibilities “because there is a big problem with the current two-party system we have, and someone has to shake it up.”

“Now, is it possible for anyone to shake it up and make a difference?” he asked at the time. “I don’t know.”

The move also upends the state of play in Michigan’s 3rd District, where several Republican candidates have announced their plans to challenge him for his current congressional seat in the GOP primary.

As an independent, Amash wouldn’t have to compete in the primary to run in the general election, although during a recent town hall in Grand Rapids, he told constituents it is “very difficult” to run as an independent in Michigan, due to straight-ticket voting and existing requirements for third-party candidates to get on the ballot.

Amash didn’t address his future plans, though he pointedly called for readers to reject both parties and expressed his belief that the majority of Americans don’t feel adequately represented by Republicans or Democrats.

“Most Americans are not rigidly partisan and do not feel well represented by either of the two major parties,” he said. “Preserving liberty means telling the Republican Party and the Democratic Party that we’ll no longer let them play their partisan game at our expense.”

Amash has always been the odd man out among his Republican peers. He has long been known for an unusual willingness to split with the party line on controversial issues including federal surveillance powers, foreign policy, and congressional procedure. That divide only widened in the Trump era.

In June, Amash stepped down from the House Freedom Caucus, a group of roughly three dozen hardline conservatives who have become some of the President’s loudest defenders over the past two years.

“I have the highest regard for them and they’re my close friends,” Amash told CNN shortly after he informed the HFC board of his decision. “I didn’t want to be a further distraction for the group.”

Amash, a founding member of the Freedom Caucus, stopped attending weekly meetings long before he formally cut ties, after clashing with members for months over differing priorities. Leading up to the 2018 election, he urged his colleagues to turn back from the path they were going down, delivering impassioned speeches about how the group was “losing sight of our purpose and our principles.”

It didn’t help Amash this year that Reps. Mark Sanford and Raul Labrador, his closest allies in the fight for the Freedom Caucus’ soul, were no longer in Congress.

“In some sense, you’ve delegitimized objections to the President,” Amash told CNN of the group’s loyalty to Trump in March. “You’ve built up such credibility for him that you just can’t challenge him anymore.”