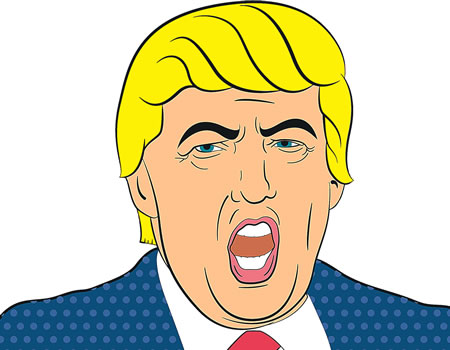 President Donald Trump and his aides courted moderate Republican lawmakers on Wednesday on a proposal to overhaul the U.S. healthcare system as the White House struggled to avoid another embarrassing defeat on a top legislative priority.

As White House aides prepared for meetings and phone calls to persuade skeptical lawmakers on the healthcare bill, Republican House of Representatives Speaker Paul Ryan backed efforts to incorporate changes to the bill that would address concerns among party moderates over insurance coverage for people with pre-existing medical conditions.

Republican moderates who are working on the amendment, Fred Upton, Billy Long and Greg Walden, will meet with Trump at the White House on Wednesday, a White House official said on condition of anonymity.

Any changes aimed at assuaging the concerns of moderates, however, could jeopardize the support of conservative members who want to keep the bill’s costs down.

The difficulty of placating the various Republican factions posed major hurdles for the White House, which is aiming for a vote in the House by the end of this week on the legislation to replace Democratic former President Barack Obama’s 2010 Affordable Care Act.

Republicans control the White House and both chambers of Congress and the failure of the latest version of a bill to replace Obamacare would hobble Trump as he seeks to move on to other complex legislative initiatives including tax reform.

Trump, who promised during his election campaign to repeal Obamacare on Day One of his tenure, began making calls to lawmakers personally to save the legislation, Politico reported, citing two unidentified sources.

The first attempt at repealing Obama’s signature domestic legislation failed in March when conservative Republicans objected that it looked too much like Obama’s law. Millions more Americans acquired healthcare coverage under Obamacare, but Republicans have long wanted to overturn the law, viewing it as government overreach and complaining it has driven up healthcare costs.

The revamped healthcare legislation took a hit on Tuesday when Upton said he would not support the measure. He said he opposed an amendment, backed by members of the conservative Freedom Caucus, that allows states to waive pre-existing illnesses as part of essential benefits coverage.

“I told leadership I cannot support this bill with this provision in it,” Upton told WHTC News radio. “There are a good number of us that have raised real red flags and concerns.”

Mick Mulvaney, Trump’s budget director, told Fox News there could be a breakthrough on the bill on Wednesday.

The Obamacare provisions that force insurers to charge sick and healthy people the same rates have been popular with Americans, and Trump has promised to retain such protections.

The issue received more attention after late night talk show host Jimmy Kimmel tearfully revealed on Monday evening that his newborn son had a congenital heart condition, saying it brought home to him the importance of health coverage for people with such pre-existing illnesses.

As of Wednesday morning, Kimmel’s monologue had been viewed nearly 17 million times on his show’s Facebook page and was the No. 1 trending story on YouTube, viewed more than 9.2 million times. It was shared nearly 258,000 times on his personal page.

Obama voiced his support for Kimmel in a post on Twitter: “Well said, Jimmy. That’s exactly why we fought so hard for the ACA, and why we need to protect it for kids like Billy.”

Mulvaney, a former lawmaker and former member of the Freedom Caucus, said on Wednesday the White House understands the sensitivity of the pre-existing conditions issue.

Mulvaney told Fox he was moved by the Kimmel clip and added that “everybody agrees with Jimmy Kimmel.”

Removing sick people from insurance rolls was not the aim of the Republican healthcare bill, he said, but added, “The point is that the state governments know how to treat children like the Kimmel baby better than the federal government does.”

FG to unveil new investors for refineries in Sept 2017