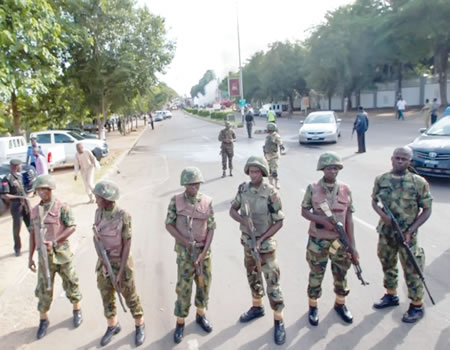 The Defence Headquarters (DHQ), on Monday, said that in continuation of the aggressive clearance operation to stamp out banditry and other sundry crimes in the country, the troops of operation thunder strike neutralised two armed terrorists while others escaped with gunshot wounds along the Abuja- Kaduna expressway.

This was contained in a statement made available to newsmen in Abuja by the Coordinator, Defence Media Operations (DMO), Major General John Eneche.

He explained that the operation was executed on Sunday by the Troops at Rijana acting on credible intelligence on the movement of some suspected bandits towards Abuja-Kaduna expressway.

He said that the troops were swiftly mobilised to the scene and laid ambush along the suspected bandit’s route.

According to him, contact was made and the gallant troops overwhelmed the bandits with superior firepower thereby killing two bandits while others escaped with gunshot wounds”.

He added that in the course of the encounter, two locally made guns were recovered while the troops have continued to dominate the area with aggressive patrols to deny bandits freedom of action.

Bandits demand N10m ransom for the corpse of victim in Kaduna