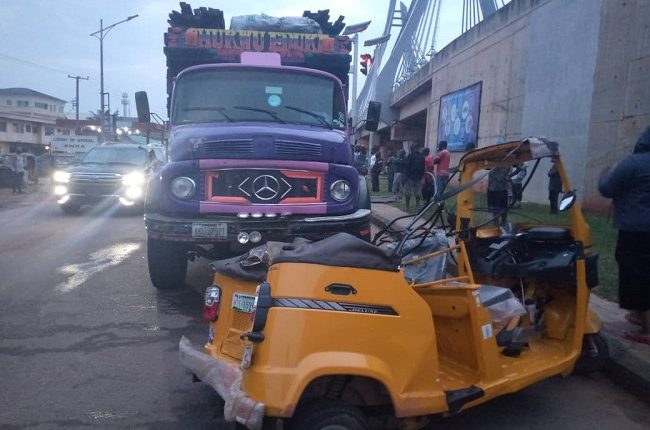 A tricycle operator, on Saturday, lost his life in a fatal traffic road crash at Kwata junction, along Awka-Enugu expressway, Awka, Anambra state.

According to an eyewitness, the driver of the tipper beat the traffic light and rammed into the tricycle, whose rider was obviously not concentrating.

He said the tricycle rider was killed instantly, while the female victim sustained serious injuries and was rushed to an unknown hospital by the other male victim in the tricycle and yet to be identified persons.

He said the corpse was deposited at the morgue at, Chukwuemeka Odimegwu Ojukwu University Teaching Hospital, Amaku by FRSC rescue team in the state and the tipper driver and his motor boy were equally arrested by the Police and taken to the Central Police Station, Awka, for further investigation.

While sending his condolences to the family of the dead and wishes the injured victim quick recovery, the State Sector Commander, Mr Andrew A Kumapayi, strongly warns drivers against violating Road Traffic Rules and Regulations in the state.

Magu Writes IGP, Demands Release From Detention
The suspended Meanwhile, Magu, on Friday, wrote the Inspector-General of Police, Mohammed Adamu, demanding that he be granted bail… Read Full Story
Magu’s Security Details Withdrawn
A source in the EFCC informed Saturday Tribune that the police authorities withdrew Magu’s security details and ordered them to return to their normal duties. “The police have withdrawn Mr Magu’s security details and ordered them to return to their normal duties. The directive was given today (Friday),” the source said… Read Full Story
Northern Leaders Caution FG On Magu’s Travails
Some northern elders have reacted to the probe of the suspended EFCC’s acting chairman. A Second Republic lawmaker, Dr Junaid Mohammed, said it is unfortunate that a retired judge of the Court of Appeal would be called upon to “do a dirty job” for the government or some group of people against the embattled EFCC boss… Read Full Story
IGP Orders Mobile Police Commanders To Replace Men Posted To EFCC Offices
The Inspector-General of Police (IGP), Mohammed Adamu, on Friday, directed the immediate replacement of all policemen posted from the police mobile force to serve at offices of the Economic and Financial Crimes Commission (EFCC) nationwide… Read Full Story