Full text of tribute to the late Sir Adesoji Aderemi, the Ooni of Ife, by Chief Obafemi Awolowo on 11th July, 1980. It was titled: 'Adesoji Aderemi- Radical Traditionalist' 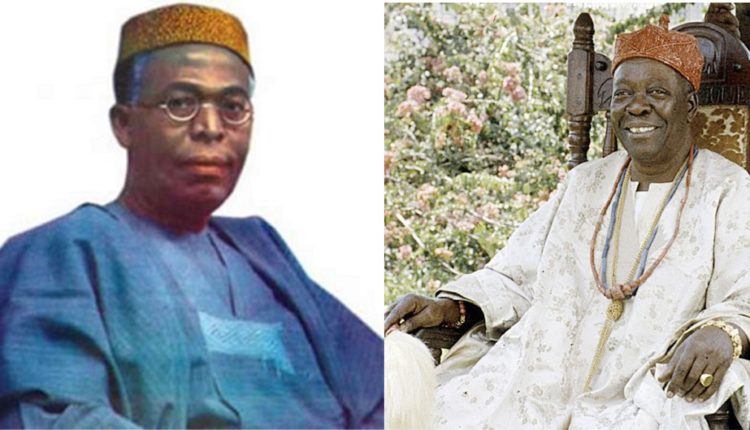 Some people demand honour from their fellowmen, and sometimes. by sundry devices, succeed in forcing and enforcing it. Others, who are very rare in their breed and number, command honour: they evoke, it; they deserve it; and they do so because of their profound, worthy and abiding contributions to the welfare and happiness of their fellowmen, and the greatness of their fatherland. OBA ADESOJI ADEREMI belongs to this latter breed of mankind.

Adesoji Aderemi became the OONI OF IFE in 1930. At that time, fifty years ago, the only reputation Ile- Ife had was that it is the Cradle of the Yoruba people. But within ten years of his rule, Aderemii had transformed Ile-Ife, by Nigerian standards, into a modern town – a virile business centre, and a haven for the acquisition of secondary education which was a very rare facility in those days. He personally initiated and took charge of plans for the beautification of Ife town. The first set of modem buildings in Ile-Ife were designed by him. He personally supervised their construction in all cases where the owners lived abroad – in Ibadan, Lagos or elsewhere.

As a Natural Ruler, Oba Adesoji Aderemi can be described as a RADICAL TRADITIONALIST in the same illustrious brackets as Qba Ladapo Ademola, the late Alake of Egbaland.

Reformation – especially radical reformation – and traditionalism go ill together. But Oba Adesoji Aderemi, the occupant of the throne of Oduduwa, was always one of those in the forefront of every radical socio-political change that occurred in Nigeria throughout his time.

He advanced the cause of education, in all its facets, in lie- Ife. Without his unrelenting efforts and his tremendous weight, the Local Government Reform introduced in the Western Region in 1953 would never have passed through the House of Chiefs. The Education and Health Levy, introduced in the same year, would have had a much rougher and more turbulent reception without the resolute backing of Oba Aderemi and Oba Ademola. Oba Aderemi wholeheartedly supported the 5/- minimum wage, and saw to it that the Local Government staff and his personal staff were among the first to benefit from it. The motion for the creation of a Midwest Region out of the then Western Region received his blessing.

There was scarcely any innovation or major measure in the Western Region which I did not clear with the late Ooni (and of course the late Alake Oba Ademola) before embarking upon it. To me as Leader of Party in Power and as Premier, the late Ooni of Ife was indeed a pillar of strength: he was guide, philosopher and friend. Sometimes, it did take time for us to reach a consensus. But once an agreement was reached, Oba Aderemi could be absolutely depended upon to fulfil his part.

He was a frontline nationalist. If he had not been an Oba, he would, in my judgment, have occupied a  position of leadership in the affairs of the country as from the late thirties such as some of us have occupied since the early fifties.

The progress of Nigeria towards independence was greatly accelerated by the motion-for-self-government-in-1956 filed by Tony Enahoro in 1953 at the instance of the Action Group of Nigeria. Without the mighty backing of the late Ooni and the late Alake, the motion would not have even reached the Order Paper. Late Sir John Macpherson had left no stone unturned in trying to get Oba Aderemi and Oba Ademola to dissuade us from pursuing the motion. In the alternative, he had urged them to mobilise all Western Region Obas and Chiefs to oppose the move. This is not the place to disclose the diverse forms of cajolery and veiled threats employed by Sir John during the discussions.

But the late Ooni and the late Alake immovably stood their ground. The emancipation of their country was of greater concern to them than any material thing or official honour that could be gained, or any inconvenience that could befall them. When the motion for Independence was killed in the House of Representatives by the NPC’s dilatory tames, the Action Group and NCNC members walked out of the House. Oba Aderemi and Oba Ademola also walked out with us.

Immediately after the walkout, the Ooni proceeded to the Government House to tender his resignation from the Council of Ministers. And thereafter, throughout the contest unto final victory, the late Oba Aderemi did not waver even for a fleeting moment. When the big test came –that is when Sir John tried to divide our ranks by nominating the late Ooni to the Council of Ministers to the exclusion of Bode Thomas and others, the late Oba Aderemi voted against himself with the same determination and defiance as all of us in the Joint Session of the Houses of Chiefs and Assembly did. In the end, thanks to his steadfastness, we had our way.

Stricty speaking, Oba Aderemi could be described as a socialist proselyte of the gate. He abhorred violence no matter the merit of its objective. He held the view that anything obtained through violence or bloodshed would not endure. He detested the term ‘socialism’. But he passionately believed in equal opportunity for all; and never lost a chance in participating actively in anything that would bring this about, for the people of Ife, of the Western Region, and of Nigeria.

On his ascension to the throne, Adesoji Aderemi swiftly abolished all those obsequious customs which had for centuries kept the Ooni’s Chief in a state of abjectness viz-a-viz the Oba himself; his Chiefs are to sit as dignified men on chairs; and none is ever again to leave half of his body uncovered as of old. They are to be gorgeously dressed. Only one very old Chief begged most respectfully to dissent. He thought it was anathema for him to raise himself in these matters to the level of the Ooni. His supplication was reluctantly granted.

Sometime in 1954 or so, the late Ooni and I had a discussion. Pandit Nehru of India had declared that at the end of this century, there would only be FIVE SURVIVING MONARCHS: the king of heart; the king of club; the king of diamond; the king of spade; and the king of Britain! The late Ooni had no hesitation in agreeing with Nehru. He did state clearly, however, that if and when this occurred in Nigeria, be it in his life time or after, his aspiration was that his children should be among those who would manage the affairs of the country. He must have felt gratified that though the administrative power of Traditional Rulers in Nigeria had been much curtailed, his own children are among those who now manage the affairs of the country.

Oba Adesoji Aderemi and I met about 39 years ago. He had known me by reputation through my newspaper articles, and my activities in the Nigerian Motor Transport Union and Nigerian Produce Traders’ Association. About that same time, there was a newspaper controversy about the relative status of the Ooni of Ife among Yoruba Obas. I had taken part in this controversy. Because of all these activities,  he had developed an admiration bordering on affection for me. Consequently, from our first meeting, a father-son relationship commenced between him and me. In due course, we became very deep friends.                ‘

As a friend, he was the very embodiment of loyalty and devotion. As a man, he was the symbol of tolerance and mirth. As an Oba, he was the epitome of a humane and liberal Ruler. Wherever he was, he diffused geniality and peace. I never knew him – in all our 40 years odd together- to be angry even once, or to speak one harsh or offensive word to any man.

He was an exceedingly devoted father, He had over SIXTY CHILDREN, and saw that they all received good education. He gave himself the sobriquet of ATOBATELE. And that was what he was: a wealthy kinglike prince before he ascended to the throne.                 .               ‘.

During all our innumerable meetings, discussions and conversations, the late Ooni did not, even on a single occasion, raise any issue of personal benefit to himself. His sole concern. at all times, was the welfare of his dear people in Ile-Ife, and in Nigeria as a whole.

Oba Adesoji Aderemi, the late Ooni of Ife, has left his wives, children, friends and fellow-citizens NOT TO MOURN HIM, but to REJOICE at his great life greatly, richly, and beneficially lived, and to EXULT in his TRANSITION TO DIVINE BEATITUDE and IMMORTALITY.