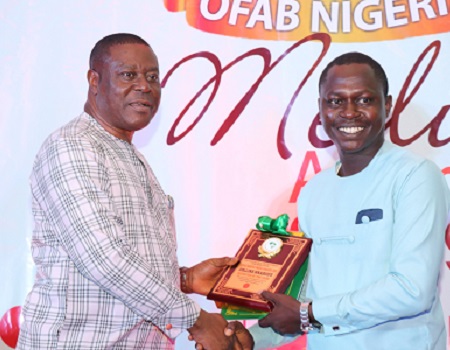 THE Open Forum on Agriculture Biotechnology (OFAB) has conferred a Nigerian Tribune Reporter, Collins Nnabuife, with the Reporter of the Year Award.

The award ceremony which was organised by OFAB in collaboration with the National Biotechnology Development Agency (NABDA) and the African Agriculture Technology Foundation (AATF) was designed to celebrate journalists and media houses for their role in creating awareness on the use of biotechnology to improve the agricultural sector.

The Country Coordinator of OFAB, Dr Rose Gidado in her address, said the award was organised annually to encourage journalists to do their best.

“This award, which is the 3rd of its kind celebrated annually across the seven OFAB host countries in Africa- Kenya, Tanzania, Ethiopia, Ghana, Uganda, Nigeria and Burkina Faso- aimed at recognising the talents and efforts of journalists so as to motivate them to shine in their reportage of modern biotechnology.

“On this premise, OFAB Africa organises an award ceremony every year to encourage journalists and motivate them to do their best. Hence we are here to give away this year’s awards in three categories, namely Best TV, Best Radio and Print.

ALSO READ: We must scrap this INEC now… —Olabode George

“The awards to be presented today are not just for recognising those journalists who have performed exceptionally well in their reportage but also to honour those who are proactive and have contributed greatly to deepening the understanding of modern biotechnology in the country in the last one year.

“Over the last few years, then media has been an ally in the communication of credible scientific facts surrounding Genetically Modified Organisms (GMOs). They have worked with us in demystifying genetic modification technology and encouraging our people especially farmers, grassroots communities, civil society groups lawmakers, judiciary and policymakers on the power as well as the efficacy of the technology,” Dr Gidado said.”

Also speaking the President Nigerian Biosafety and Biotechnology Consortium (NBBC), Professor Celestine Aguoru while commending OFAB for the award on the media, urged the media to distinguish between experts who provide information on biotechnology and those who dabble into subjects they have no training in.

“The media as the fourth estate of the realm which determines, directs and changes the narratives in every subject or discourse have the responsibility to profile the pedigree of everyone making comments on the applications of modern biotechnology in Nigeria to sieve out the grains from the chaff.

“The media must as a matter of urgency distinguish between experts who provide accurate information and pedestrians who dabble into subjects that they have no training in.

“As NBBC President, I have come to the conclusion that there is a need for deeper collaboration between us the scientists and the media practitioners who have the language of the non-scientist,” he said.